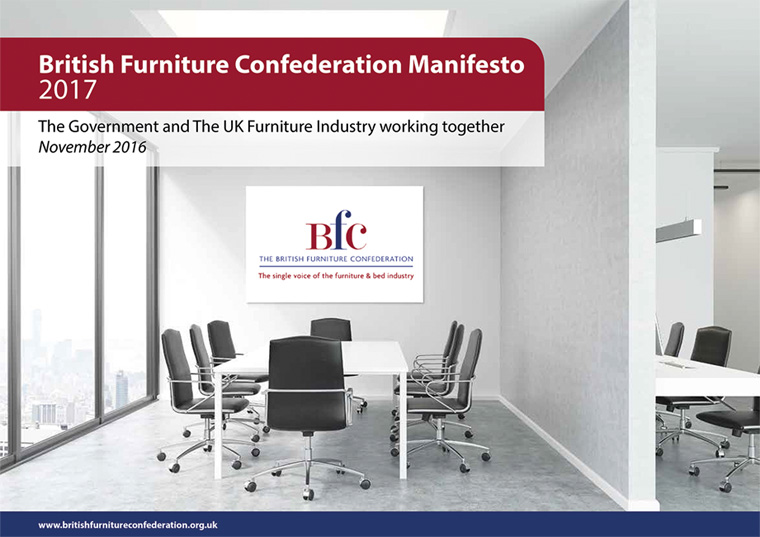 The British Furniture Confederation (BFC) is the UK’s furniture industry’s representative body which seeks to ensure all Government policies and initiatives support a thriving furniture, furnishings and bed sector. The organisation has published its 2017 Manifesto calling for strong action from Government.

Today, the Manifesto has been sent to ministers across Government, as well as shadow ministers and key members of the All Party Parliamentary Furniture Industry Group, with clear, implementable calls for action to bolster the furniture, furnishings and bed industry.

“The BFC’s mission is to sustain a strong and influential dialogue with Government, ensuring that its policies support a thriving UK furniture industry,” says BFC chairman Jonathan Hindle. “Our Manifesto examines the key issues that affect our industry and highlights the clear actions the Government should take to ensure it thrives in the years ahead.”

The BFC Manifesto has been developed in response to an industry-wide survey it conducted soon after the EU referendum was held. The survey, completed by almost 150 companies, identified a number of key challenges as well as opportunities for the industry.

Some of the challenges identified in the survey include:
• Between one third and one half of respondents across the board, from low end to high end retail, commercial and public sectors, had experienced a slowdown in business
• 63% had experienced a material increase in costs
• 88% expect further cost increases over the coming months – however only 40% expect to pass these on to customers

• 59% have difficulty recruiting high calibre , well-trained staff
• Only 28% use current industry apprenticeship schemes
• 68% of exporting companies say that access to the single market is essential or important to their business
• 80% are unable to access EU or UK Government funding for new investments 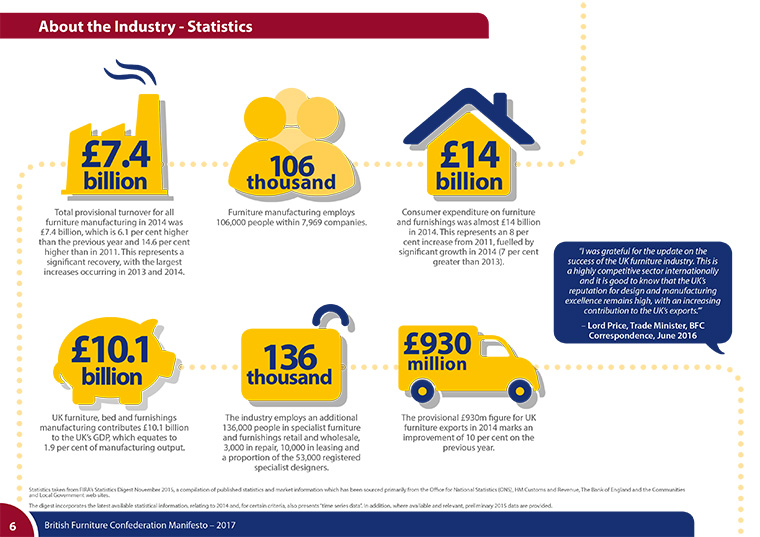 However, there were also a number of opportunities the Government ought to be aware of which could make a real difference to furniture manufacturers - and these are among the areas on which the BFC plans to focus its efforts. These include:
• Greater liaison with the industry to fully understand market conditions and requirements the industry needs to protect, develop and grow
• Clearer improved advice or a central knowledgeable resource about specific export markets and their legal requirements
• Ensuring competitive trade agreements are in place
• More financial encouragement for export – such as tax breaks
• Continued access to the Single Market and to European labour markets for skilled workers

The Manifesto outlines the BFC’s specific action plan for 2017 across four key areas: skills and training, exporting, the flammability regulations, and sustainability.

On exports, the BFC is looking for a clear, five year, sector-specific support strategy so businesses have sufficient confidence to plan ahead, together with more powers and funding for Trade Challenge Partners. It also wants the Government to recognise furniture manufacturing as an important part of the economy in its own right and not just as part of the creative industries.

Bearing in mind the importance of trade with Europe, the BFC will urge the Government to provide as much information about its plans as soon as possible and to prioritise tariff-free access to the Single Market in its Brexit negotiations in order to preserve confidence and ensure a stable business environment in which businesses can plan.

On flammability, the BFC will continue to raise the major concerns still remaining over the proposed amendments to the flammability regulations. The BFC supports the Government’s desire to see a reduction in the use of fire retardant chemicals, so long as it does not compromise safety.

However it does feel that the current proposals could have the opposite effect, as well as being more difficult to police or to achieve consistent results in comparison to the current state of affairs.

While the BFC welcomes the Government’s support for apprenticeship schemes, it is keen that the emphasis is on quality and not just quantity. It is keen to ensure there is a long term strategy of support to make both employers and potential apprentices aware of the benefits.

At the same time there are concerns that the Government’s focus on core subjects, as expressed in EBacc and Progress 8 performance measurements in schools, are in danger of marginalising design and technology on which the industry’s future depends. The BFC will continue to press for equal recognition for these more practical skills.

The BFC will also be warning the Government not to follow immigration policies which widen the skills gap or which disproportionately harm SMEs.

The BFC’s fourth platform for action is on sustainability, embracing product End of Life (including recycling) and resource efficiency as the country moves towards a circular economy. The Confederation recognises the need to transform the British economy to one with sustainability at its heart. It will be looking to engage with the Government from the earliest stages to jointly address the considerable challenges involved. 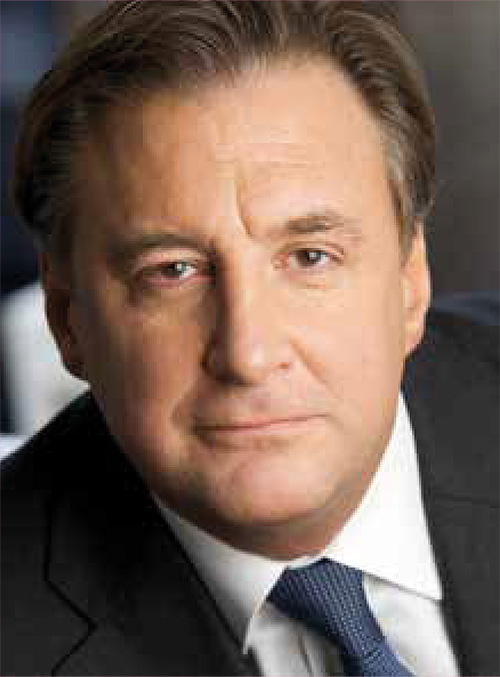 Jonathan Hindle stated: “We must keep on reminding the Government of the importance of British furniture manufacturing to the economy - an industry of around 8,000 businesses employing upwards of 106,000 people across the UK and producing more than £10bn worth of product.”

About the industry - statistics