More than 30 furniture industry leaders – including senior executives from Hypnos, Silentnight, Dreams, Marks & Spencer, Furniture Village, Steinhoff, QFC and Parker Knoll – joined MPs and peers, trading standards officers and industry trade associations at the House of Commons earlier this month, to network and discuss the effect rogue traders has on their businesses.

The event was organised by the British Furniture Confederation (BFC) and hosted by Stephen McPartland, MP for Stevenage. Mr McPartland also announced his continued chairmanship of the All Party Parliamentary Furniture Industry Group (APPFIG) - which, following the General Election, was formally re-established at the Afternoon Tea event.

Jonathan Hindle, chairman of the BFC said: "I was delighted to see the support that both parliamentarians and industry executives showed through their attendance at this event. In particular, I’d like to thank Stephen for his continued chairmanship of the APPFIG. Working with the APPFIG is one of the industry’s key routes to Government to ensure that policy decisions are made with a clear understanding of the complexity and pressures faced by the furniture and furnishings industry.

“We are also delighted that other parliamentarians with furniture companies in their constituencies have agreed to become officers of the newly formed APPFIG.”

In addition to these APPFIG officers, the event was attended by Madeleine Moon, MP for Bridgend; MP for Dudley South; Andrew Stephenson, MP for Pendle; Julian Smith, MP for Skipton and Ripon (and Deputy Chief Whip, House of Commons); Rosie Cooper, MP for West Lancashire; Gareth Snell, MP for Stoke on Trent Central; and Bill Esterson, MP for Sefton Central and Shadow Minister for business, energy and industrial strategy as well as international trade. 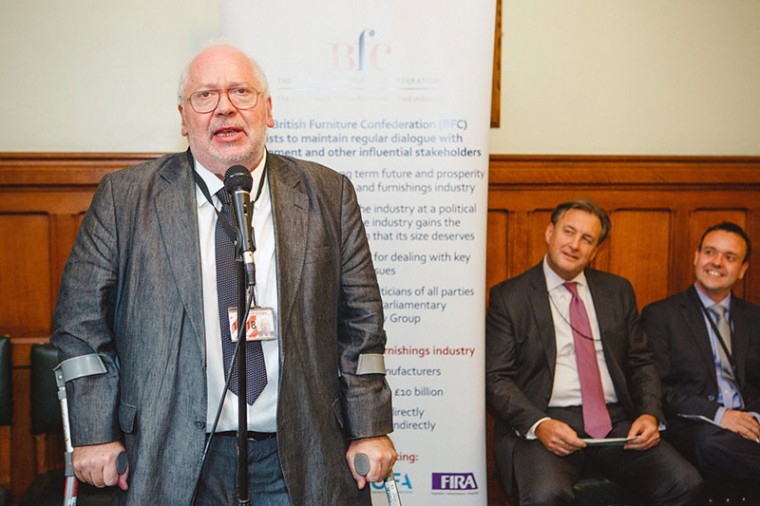 Lord Toby Harris chairman of the National Trading Standards Board

Speakers at the event included Stephen McPartland; Lord Toby Harris, chairman of the National Trading Standards Board; and Erica Sheward from the Regulatory Delivery team at BEIS, which oversees Primary Authority Partnerships with regional trading standards authorities. They addressed some of the issues facing both industry and enforcers in fighting back against a rising tide of rogue traders - particularly the new challenges presented by ecommerce - and described the benefits of working together through direct and co-ordinated Primary Authority Partnerships .

Thanking the speakers for their contribution, Mr Hindle said: “Over the coming months, the BFC will be working to follow-up with all attendees so that the issues discussed at the meeting can be fed back to the Ministers responsible.”

The British Furniture Confederation (BFC) is the UK furniture industry’s representative body which seeks to ensure all Government policies and initiatives support a thriving furniture, furnishings and bed sector. Its current ‘Manifesto’ covers issues such as skills and training, exporting, regulations – in particular the furniture and furnishings fire safety regulations – and sustainability.