Eight members of The Furniture Makers’ Company have raised almost £14,000 for the charity by collectively cycling all three routes of Mont Ventoux, Provence in a single day.

The Master’s Challenge was organised by Hayden Davies, Master of The Furniture Makers’ Company, and took place on Thursday 13th September.

The team arrived in Marseille, France on Tuesday 11th September and spent two days cycling through the beautiful landscapes of Lourmarin and Bonnieux in preparation for the ascents up the 6273ft Giant of Provence – a regular feature of the Tour de France. 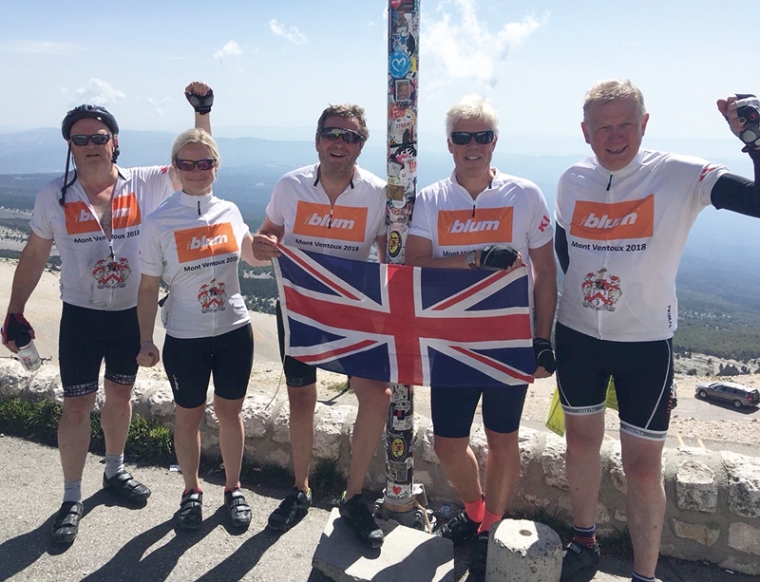 Team Two at the finish post, atop Mont Ventoux, in Provence, France

There are three routes up the mountain, which vary in length and difficulty – Bédoin (13.3 miles), Malaucène (13.1 miles) and Sault (16 miles). In order to complete the challenge, each member had to finish at least one of the ascents, with the team collectively completing all of them.

After a gruelling day of cycling with the sun beating down, all of the members successfully cycled one ascent, with John Irwin and Daniel Mesecke finishing two. However, Graham Jones pulled out all the stops to be crowned King of the Mountain by completing all three in under 10 hours.

Master of The Furniture Makers’ Company Hayden Davies said: “What a fantastic few days it was. Two days’ cycling across Provence with the sun on our backs and then a full day all working as a team to conquer Mont Ventoux. Even the Giant, as it is known by the Tour de France, gave us benign conditions. At the end of that day, as we sat on the summit, I think we all felt on top of the world – in more ways than one. It is a memory that will stay with us all forever. I’d like to thank everyone who has sponsored us so far and helped us raise such a significant sum for the charity.”

For more information on how to sponsor the team, visit https://www.justgiving.com/teams/FMCMontVentoux