Six members of an organised crime network, which smuggled almost three million illicit cigarettes into the UK hidden in hollowed-out table tops, have been sentenced for their role in evading more than £657,000 in taxes. Four of the men were jailed for a total of 10 years and two months.

Dominik Mrzyglod, 37, the ringleader, and William Jurado, 68, were arrested by HM Revenue and Customs (HMRC) investigators as they observed the men loading cigarettes into a white van at a rented industrial unit in Quarryside Business Park, Redhill, Surrey in June 2014.

The cigarettes smuggled inside table tops 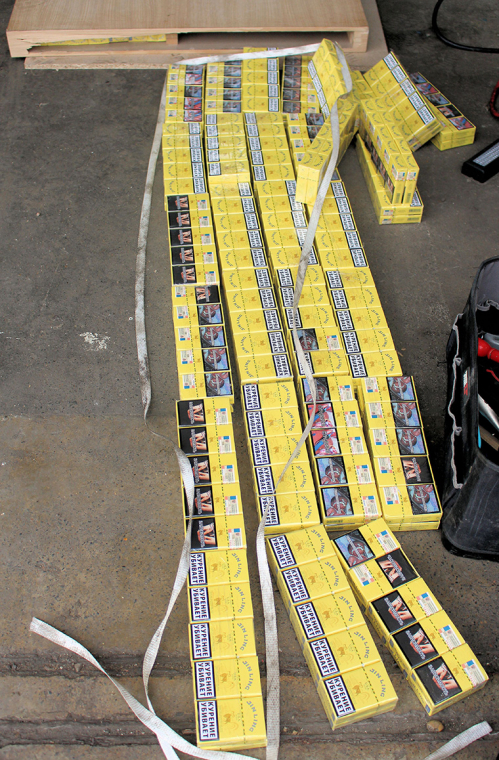 Officers seized more than one million Jin Ling and Blue Fest cigarettes, worth in excess of £240,000 in unpaid excise duty, plus 81 pouches of counterfeit Golden Virginia hand-rolling tobacco. The cigarettes, which had been smuggled by lorry from Poland hidden inside hollowed-out table tops, were seized from the storage facility and from the van.

Friad Mahmoud, 45, was arrested in Enfield, London in November 2014. He was identified as the person who had rented the van the men were loading in Surrey.

In April 2015 Marek Czwartkiewicz, 38, Michal Koc, 37, Ismail Mohamoud, 34, and Dominik Mrzyglod were arrested by HMRC officers after a second operation.

Investigations revealed that between January and April 2015 at least 1.74 million cigarettes were smuggled into the UK by lorry, and offloaded at a rented storage unit at New Road Industrial Estate, Sheerness, Kent.

In March 2015 Ismail Mohamoud was stopped by Metropolitan Police officers in London. 512,800 Viceroy and Brendal cigarettes, worth more than £123,000 in excise duty, were found in the back of the silver van he was driving.

In April 2015 HMRC investigators seized in excess of 1.2 million Jin Ling and other branded cigarettes at the Sheerness storage unit. Again the cigarettes had been smuggled inside table tops. More than £292,000 in duty was evaded.

David Margree, assistant director, fraud investigation service, HMRC, says: “This was a brazen and well-planned criminal operation aiming to flood the UK with illegal cigarettes smuggled inside table tops, which would have ripped off taxpayers and honest retailers. The gang members thought this scam would avoid detection, but we exposed their crimes and they are now paying the price.

“HMRC continues to work with other enforcement agencies to reduce the availability of illicit tobacco, which costs the UK around £2.4 billion a year, steals from communities and harms the livelihood of legitimate retailers. We encourage anyone with information regarding the smuggling, storage or sale of illegal tobacco to contact our 24-hour hotline on 0800 59 5000.”

Friad Mahmoud, William Jurado, Michal Koc and Ismail Mohamoud were found guilty at Blackfrairs Crown Court in December last year, after a three-week trial. Dominik Mrzyglod, the controller on the fraud, pleaded guilty to his crimes. Marek Czwartkiewicz pleaded guilty to his involvement in the Sheerness operation. A seventh man was acquitted.

Upon sentencing the men, His Honour Judge Peter Clarke QC, said: “It was abundantly clear that this was a sophisticated international scheme, which by nature must have evaded millions of pounds in duty.”

Four of the men were jailed for a total of 10 years and two months at Blackfriars Crown Court in January. Two others received suspended prison sentences.

Investigators estimate around 120,000 cigarettes were smuggled inside each table top.