Leitz Tooling’s national sales manager Brian Maddox has celebrated his 40th year with the company. In reaching this almost unheard-of milestone, Leitz Tooling UK and Brian have shared an ethos of care, attention and drive which is seldom found elsewhere.

Simon Liddell, Leitz Tooling UK’s managing director says: “Brian is passionate about his work and is driven to bring smooth and efficient productivity and maximum profitability to as many companies as he can. He is genuinely inspiring, and his charity efforts are not only humbling, but physically exhausting to watch!”

Anyone who knows Brian, knows he doesn’t do anything by halves. This means that we’re not talking 24 hours in a comfy bath of baked beans. Brian has been the driving force behind Team Leitz’s fantastic Three Peaks Challenge achievement, has trained hard for – and survived – the London Marathon, and most recently led a team from Leitz in the gruelling 100km Race To The Stones.

Brian has raised tens of thousands of pounds for local causes, including Haven House Children’s Hospice for life-limited children and their families. 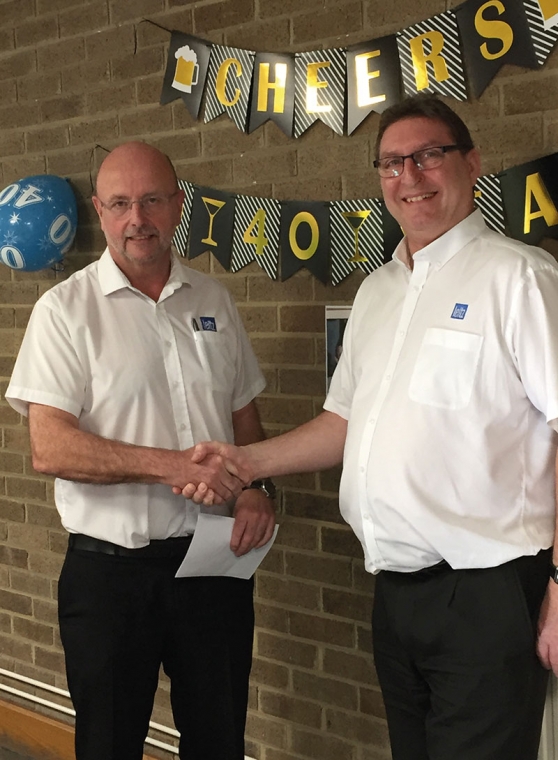 Brian began his career in the sales office of the Tottenham-based company C D Monninger in 1978; formed in 1867, C D Monninger is the oldest British woodworking saw and tooling company. In the 1960s, Leitz appointed C D Monninger as Leitz’s sole UK agent and strengthened this relationship in 1982 by acquiring C D Monninger to expand its European sales and service organisation.

Brian stayed in sales and advanced to national sales manager for Leitz UK in 1990 when the company moved from Tottenham to its current purpose-built site in Harlow. Harlow today is Leitz UK’s headquarters and one of the largest diamond tool sharpening centres in the UK.

Brian says: “Helping others in work or life is a privilege. Whether you care about the orang-utans, the environment or the kids in our world, it is just fantastic when you get to do your part, or sometimes insane things, to make what difference you can. A couple of years ago a few of us from Leitz were invited to Haven House Children’s Hospice to see the work they do.

“I could not contemplate what these poor children go through and the effect their illnesses have on their families, but our visit was eye-opening; Haven House is a truly wonderful place. The kind nature of everyone, the support they give to children during their short lives and the families, is unbelievably positive.”