The Panaz BCFA Lifetime Achievement Award recognises those who have made a significant contribution to the contract furnishing industry and their companies.

This year’s award was presented to Jack Pringle, principal, London, of Perkins and Will at the BCFA Annual Luncheon held at the Royal Lancaster Hotel in October.

Jack co-founded Pringle Brandon, which became one of the UK’s leading architects designing and specifying workplaces for some of the UK’s biggest companies in banking, professional services, TMT and hospitality. In 2012 Jack took Pringle Brandon into Perkins and Will, one of the world’s largest architects and is now regional director for Europe, the Middle East and Africa.

Jack has always had a keen interest in specifying, designing and redesigning furniture and sees furniture as a business tool as well as icons of design. He has been responsible for the design of the fit-out of over one hundred million square feet of project work. 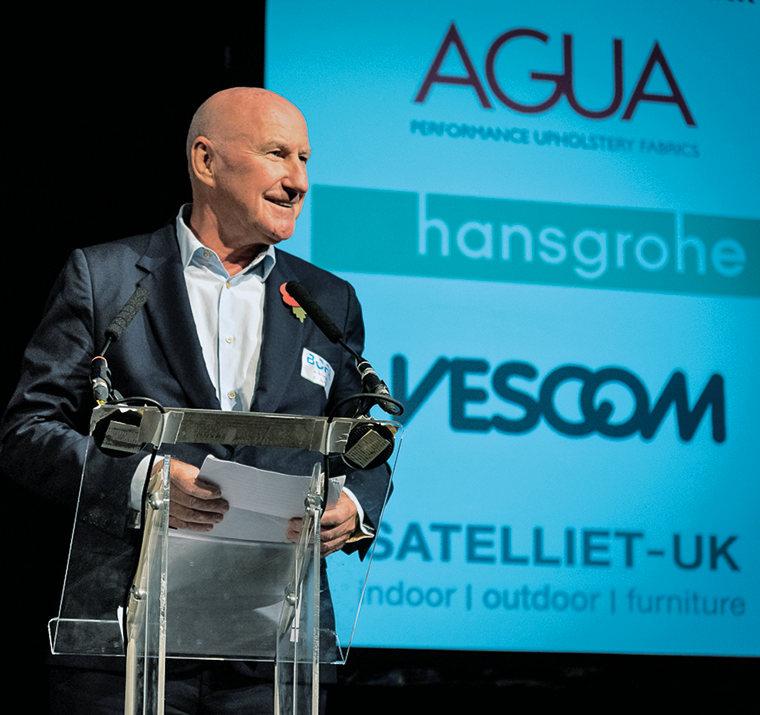 Jack established Pringle Brandon in 1986 with Chris Brandon. After the 1990 recession, the firm focused on designing commercial interiors which was the quickest market to recover. They successfully won key “recovery” projects including London Underground’s offices at Canary Wharf, BZW also at the Wharf and Deutche Bank’s HQ on London Wall. They soon became, and remained, one of the leading practices in the field with a client list that is a who’s who of UK commerce.

Jack attributes their success to the fact that they are architects who think in terms of systems that can mirror the management systems that businesses employ or aspire to. This is then converted to a design which should communicate the company’s values to staff and clients alike. Jack talks of the workplace being a movie, not a photograph – being flexible and able to change with the business over time. Jack has also been active professionally.

He worked in architectural education for 20 years and co-wrote the curriculum for schools of architecture in 2006. He was president of the RIBA from 2005-07 when he campaigned to replace PFI with a better system, chair of CIC from 2012-4 when he sat on the Government’s Construction Leadership Council advising the Secretary of State and on the International Union of Architects where he developed an international system of recognition of architectural qualifications.

In 2007 the French Government made Jack a Commandeur des Arts et Lettres, the highest rank of this cultural award, for his contribution to architectural education.