Martin Smith, managing director at JJ Smith & Co has announced that he will be stepping down from his role. Also signalling his phased retirement from the company is sales director, John Stanley. Martin and John, both born on 23rd August 1957, are third generation family members that have worked for the company for 39 and 46 years respectively.

Martin Smith joined the company as the company accountant in August 1983. On arrival, he introduced the first computer to the business, which had up to that point prepared its accounts in manual ledgers.

In the 1990s, he was appointed as MD and was responsible for a period of controlled expansion, underpinned by increasingly sound finances. In the late 1990s, Martin was able to spend less time on the management of the company and moved into sales, whilst retaining his role as MD. He used his accounting knowledge to see that an opportunity existed for the justification of optimising crosscuts, in particular to increase both productivity and yield to make this equipment financially beneficial for customers. This led to the company becoming a market leader in such machines – a position it has retained for many years.

Around 2000, he was responsible for the company’s move into the offsite construction industry, which culminated in the setting up of a joint venture Modular Building Automation bv. This market segment is now the largest of the areas the company is active in. 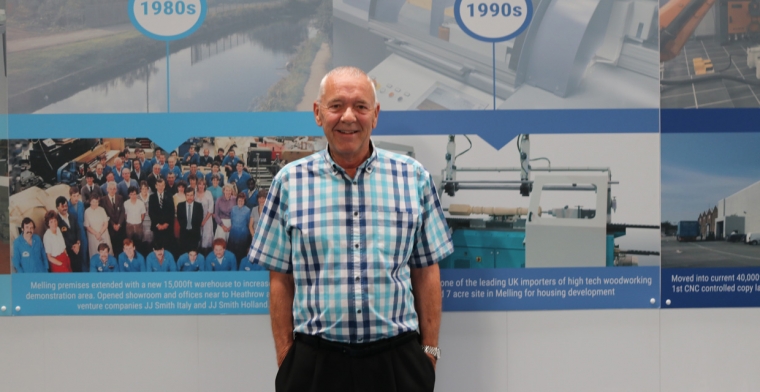 John Stanley’s journey, meanwhile, started in 1976 with an initial role training in the tooling and spare parts departments, mainly to gain knowledge of machinery operation for the joinery and furniture industries. In 1977, the company was appointed exclusive UK importer for SCM machines manufactured in Italy and he was appointed sales manager for all the equipment. After spending two months in Italy training on the SCM machines, the wide range became a huge seller over the coming years and the company’s turnover rose exponentially with sales of classical machinery and more specialised edge-banders, beamsaws, moulders and CNC routers.

Additional equipment from other major worldwide manufacturers was added over the next five years and became a mainstay for the company’s continued growth to this day.

John was appointed sales director in 1986, making him responsible for the purchasing and selling of all used machinery for the company. This led to worldwide travel, visiting customers and attending global exhibitions. During the early 90s he negotiated and completed the largest order in the company’s history at the time – the supply and installation of a complete furniture factory to Sytvytkar in Russia which took JJ Smith technicians five months to install and commission.

On stepping down from a full-time role in September this year, John will remain in the business assisting the next generation of the family (his son, Ian, being one) in the run-up to the company centenary celebrations in 2023.

Whilst stepping down from the day-to-day management of the business and retiring from the position of MD, Martin will also still be involved part time in the business, maintaining an oversight role for the larger offsite projects.

As a third generation family member, he has been keen to retain the business within family ownership and has sought to promote suitably qualified family members over the years. He is pleased that his daughter, Dr Rachael Baker, is able to take over as MD.

As a fitting gift to a keen beekeeper (and past president of the British Beekeeping Association) Martin was presented with beekeeping equipment produced by one of JJ Smith’s customers EH Thorne (Beehives) Ltd.

“On behalf of everyone at JJ Smith we are incredibly grateful for the phenomenal dedication to the company that Martin and John have shown over the past 4 decades,” says Rachael. “Through their careful and courageous leadership JJ Smith has grown into an internationally recognised business and I am honoured to be part of the team that aims to continue that work into the future.”