New man at the wood sector helm for Mirka

Mirka has a well-deserved reputation in the furniture and woodworking sector for its innovative abrasive developments and of course its outstanding tools and technology. Neil Newbrook, the company’s new wood sector manager was appointed earlier this year and John Legg took a trip to Mirka’s Milton Keynes Office to meet him.

Sat across from Neil, I asked him how his first six months in his new role had been… “It’s been great,” came the immediate response, “I’ve really enjoyed getting familiar with the industry from a slightly different perspective. I had six years at Mirka where I was looking after customers in the north-east, visiting end-users and distributors across that region in a technical sales role – so I was already very well versed in all things Mirka. Prior to that I have been in a number of wood industry roles for more than 20 years before I started with Mirka.”

Clearly with the internal relationship already in place and functioning well, promoting from within is typically an advantageous move for both the company and the employee. Neil says he realised straight away that this was a role that would suit him.

“When we did an internal reshuffle earlier this year, and this opportunity came up, I just wanted to do it straight away – it was exactly where I wanted to be, as I would be representing a leading brand on a national scale.

“Since the appointment, I’ve found it very interesting and it’s been great to have had the experience with Mirka up to this point, because I think without that, I might have struggled a little bit.”

Settling into his role as wood sector manager, Neil is naturally now more involved in the strategy side of Mirka’s development.

“Now I get to see more of the development process for new products and speak with the incredible team based in Finland. It’s been great to learn from their extensive experience and give them feedback from the UK. It sounds like marketing speak, but they really do pay attention to what our customers talk about. All the products Mirka are developing are trying to solve a problem we have discovered by having such a close relationship with the end-users” explains Neil. 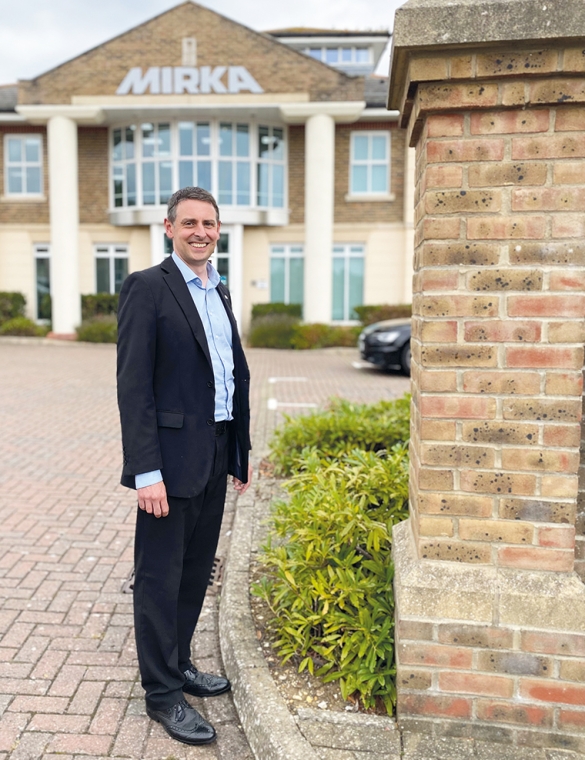 Neil pictured outside the Mirk UK HQ in Milton Keynes

As part of his role, Neil is part of this critical process: “I am learning more about the process from that point of view, so rather than merely being given products to take to market, my new role encompasses this important part of the wider theoretical and creative process.”

In addition, Neil is also involved in the marketing side of things, which includes seeing how things work at trade events, media and so forth. In terms of priorities for Neil, clearly his primary task of getting to know Mirka’s national woodworking customer base is not something that will be achieved overnight.

“I love meeting joinery and furniture manufacturers face-to-face, seeing their projects in development and finding out how Mirka can help them achieve their goals. It’s exciting to be able to broaden my horizon to include all areas of the UK and I cannot wait to visit more end users and distributors. Of course, it takes time to do this, but at least I know my diary will never be empty! In fact, Mirka UK are currently reorganising our Technical Sales team to create six Wood Sector Specialists to visit, demonstrate and advise. We’ve also just recently added an automated sanding arm to our Training Centre in Milton Keynes to show this new technology for consistent sanding.” Ian Deery, the Business Development Manager in charge of the UK’s AIROS project added “With automation you can take a repetitive sanding process and remove errors, deliver consistency, and save time”

“I am a person who is very happy in this job and am very excited about the future too.”

Regarding the future, Neil was able to give some insight into Mirka’s forthcoming innovation plans.

“We expect a number of new woodworking sector options to make their debut next year,” says Neil, “we have a couple of abrasive projects currently in development for the wood sector, and with all being well, will be launched in 2023. We will also be sharing a lot more details on the sustainability projects Mirka are involved in as part of our focus on responsible manufacturing”

“Looking further ahead, the next four, five, six years look set to be a very progressive phase for Mirka’s woodworking sector, so watch this space!”

In addition to the development and production of the company’s products, Neil also touched on Mirka’s own production processes. Innately, the Finns have a close affinity with the natural world, and Mirka likewise has always looked to be very considered in the way it approaches energy consumption and the carbon footprint of its business.

“Traditional abrasive manufacturing of setting the grain to the backing is a very power hungry process – you need a lot of heat and it takes a lot of time. The company’s improved manufacturing process can achieve this, on the new Galaxy for instance, using just a fraction of the energy. The new approach also provides increased production flexibility and an example of this is the change of production runs from one product to another can now be managed much more quickly than before.”

Over the next twelve months or so, Neil will be delivering the Mirka mantra of ‘we have the product portfolio that will cover every single application within the wood sector.’ The timing of Neil’s appointment appears to have been well conceived. With his groundwork well under way and a tranche of new products hitting the wood sector next year and beyond, Neil and his team look certain to become increasingly familiar faces to those looking for premium abrasive technology solutions.

With Neil’s appointment, Mirka UK’s wood sector team is well positioned as it gears up for a series of impending product launches which confirms yet again the Finnish firm’s innovative and customer-oriented stance.