The Anderson Linear GS 710 CNC router, the winner of the innovation award at the recent IWF exhibition in Atlanta in the US, is now available in the UK from Anderson’s long-standing business partner, RW Woodmachines. 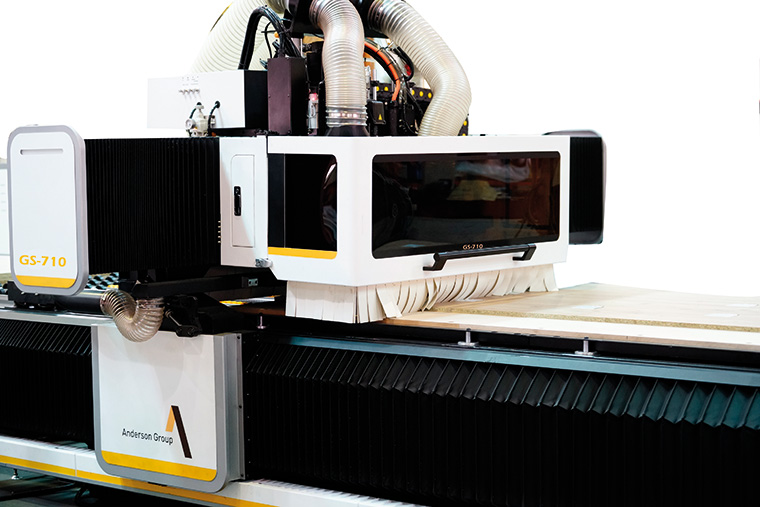 Traditional CNC routers have relied on ball screw and rack and pinion systems, limiting the axis movement and speed, and with the obvious maintenance requirements with metal-to-metal contact. The GS 710 now uses the very latest linear drive system which, in essence, floats on a cushion of air, eliminating wear and with obvious maintenance saving.

Traditional CNC routing speeds are usually between 8-24m per minute, but during the Atlanta exhibition, the GS 710 reached an impressive 90m per minute under trial conditions!

Back home in the Anderson factory, perfect panels have been produced at the speed of 60m per minute. Very simply, with a linear drive and the ability to produce instant forward momentum, opposed to standard motor drives, which have to ramp up and ramp down, Anderson says it has produced a machine to triple the routing speeds of its competitors.

With both large and small manufacturers moving towards nesting-based production, the Anderson GS 710 nesting line, which is equipped with auto-loading, auto-labelling and automatic expulsion of the finished nest, envisages an even greater shift in this direction.

RW has announced that two forward-thinking UK kitchen manufacturers have already placed orders for the Anderson Linear GS 710, both realising the advantages this new technology will bring to their respective companies.

Unitech, based in Banbury, Oxfordshire, was a very early convert to nested manufacturing and its MD, Kevin Crouch was very aware of Anderson’s reliability and performance. Unitech’s first Anderson Stratos Pro line was installed in 2010, and Kevin was faced with purchasing a second nesting line to meet greater requirements due to Unitech’s success and increased business volume.

Accepting that a second machine requires additional factory space and additional operators, the choice of an Anderson GS 710 was very easy due to the double routing speeds. Kevin is convinced that this purchase will give him the increased volume Unitech’s success requires.

Getley Kitchens, based in Stafford, has seen amazing growth over the last five years, and with sales forecast for 2017/18 increasing even further, Mark Getley was forced with the possibility of having to purchase a larger manufacturing space. He too was also an early convert to nesting, having purchased an Anderson Stratos Pro Line in 2009 and a second identical line in 2013 – achieving superb levels of production in excess of 1200 cabinets per week from these two lines.

With Getley’s order intake increasing week by week, Mark was very aware that to increase volume by purchasing another traditional router would not only require more space and operators, but also new extraction and additional auxiliary services.

When introduced to the new Anderson GS 710 and the increased output potential, Mark quickly calculated that the purchase of two new machines to replace his traditional routers would facilitate a 40% growth within his current factory, without any additional costs.

Both Unitech and Getley are looking forward to the new installations schedule for April/May this year and are excited by this new technology, and of course, a significant increase in manufacturing output.