It’s on with the show for Theatre Royal Plymouth

Theatre Royal Plymouth has invested in its own CNC machine to prevent delays caused by sub-contractors long lead times and faulty cnc-manufactured elements when creating its stage sets.
Home / Projects / Articles / 2017 / May

Theatre Royal Plymouth (TRP) produces and co-produces with some of the best artists and theatre producers nationally and internationally, bringing the best performances and shows to the South-west.

Alongside putting on its own shows, the Production and Learning Centre at TRP also does a lot of work in the local community running classes in more than 50 schools as well as after-school classes and production workshops with over 500 members.

It also runs the People’s Company, which offers playwriting and one-off summer productions for people that would not otherwise have any access to classes, as well as the Voices Choir and Our Space, which assists people with drug- and alcohol-related issues, as well as homelessness.

In the past, TRP would pay for another company with a CNC machine to create parts of its sets, but was finding on occasions that there were mistakes in some of the pieces that it had ordered. This meant they would have to be sent back and done again, causing delays in TRP’s already-strict production timelines.

To solve this problem, TRP decided it was time to purchase its first CNC machine. Head of workshop, Brendan Cusack, says: “To achieve everything we wanted, we needed a machine that runs and runs. We needed a tank and that is exactly what we got!”

After a lot of research, the company decided that the profit H08 from Felder’s Format-4 range was the machine for TRP. Brendan comments: “From the very beginning, Felder got us – they took the time to listen to what we wanted and tuned into what we needed.” 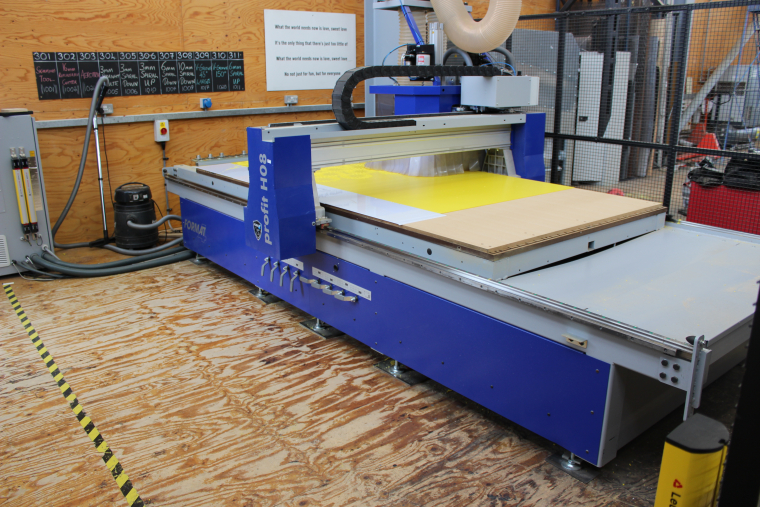 He continues: “The highly versatile machine is perfect for our team of designers. The speed of getting people working on the machine has been fantastic and what we have been able to achieve so far has blown me away.”

Since getting its profit H08, TRP has not only been able to build its own sets, but has been able to work on commercial set-building projects, like building palm trees and store fronts for West End shows and bespoke art pieces for the Tate.