Ian Firth Hardware has been supplying the housing market with door and ironmongery products for over 35 years during which time it has grown and evolved to suit changes in demands and technologies.
Home / Projects / Articles / 2017 / July

Over the last decade, there has been a shift in the construction methods housebuilders use for doors/frames, which has seen them move from the traditional way of ordering individual components to now buying complete fully machined door sets which are ready to quickly and easily fit on site.

Due to an increase in demand for these door kits, Ian Firth has recently invested in two additional Centauro ALFA NC milling machines from JJ Smith to work alongside the two already installed in its Dewsbury factory.

The ALFA is an easy to program, quick to set up automatic machine that can be used for the production of doors and door components including the machining of the door linings for hinges/lock keeps, handle holes and key slots, lock slots, three-point locking systems, door closers etc.

Thanks to the CNC-controlled router head that works both in the vertical and horizontal, the machine is very versatile and gives repeat machining accuracy. Standard X-axis capacity is 2800mm, while the Y-axis capacity is 150mm with the option to increase this to 600mm. 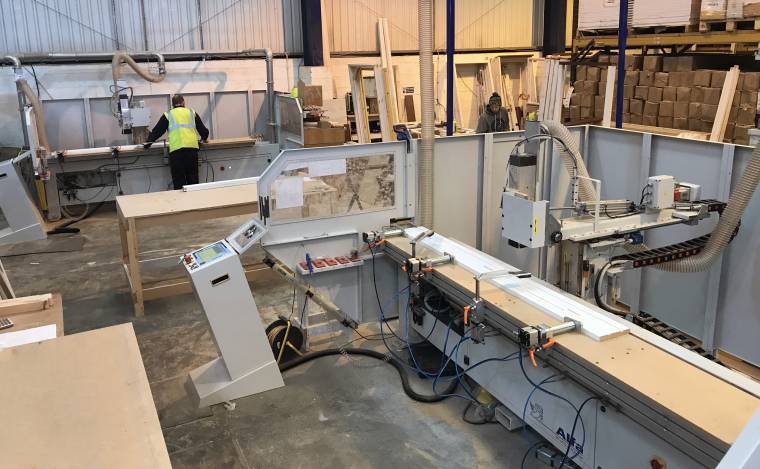 Programming is via the Power 1000 colour graphic touch screen controller with pre-installed electronic macro templates which makes programming extremely simple and usually operators can be fully trained within one day. Options include a turntable for doors, additional router head for drilling or squaring of corners for square hinges and table extensions.

When it became apparent that the company needed to increase production output, operations manager Nigel Robinson did not hesitate to contact JJ Smith’s Paul Parker who he had originally dealt with when purchasing the first two machines.

Nigel comments: “Initially we had started to think along the lines of investing in another large bed, fully-equipped CNC router. However when we looked at what we wanted to actually do on the machine everything pointed to going with another two ALFAs.

“The first machines had worked extremely well since day one, the operators were very comfortable operating and programming them, the footprint is relatively small and also the cost compared very favourably against the larger CNC machines we had first considered.”

An order was confirmed and both machines were installed and working on schedule in just 10 weeks. The fact that Nigel knew the order and installation would as usual be conducted in a very professional manner was another reason he had total confidence in placing the business with JJ Smith.

The machines supplied were complete with the quick-change ISO30 tool system and also with optional wider table and a horizontal clamping system which allows for two frame- or door-jambs to be machined together, thus maximising production output.

Robin Firth, commercial director for Ian Firth adds: “We supply some of the UK’s biggest house builders and since the upturn in the housing market the increased demand for our doors/door kits has risen by around 50%.

“As a result we have made some significant investments in new machinery and personnel to make sure we can keep pace with demand and provide our customers with the service they have come to expect from Ian Firth.”