Imagine if you started a company and managed to plan your resources to perfection. Your vision was realised and the risks associated with a business start-up evaporated as your business thrived. Your marketing and customer service proved your belief that the business model was indeed correct and customers needed your products and services. Could it be too good?
Home / Projects / Articles / 2017 / July

Stuart Hattersley, managing director of Sheffield Kitchen Outlet, recalls those early days. “We invested in three panel saws which were operated by five men. We also had a second-hand edgebander, which was a bit slow but did a job. At first it was ideal, but orders ramped up so fast that in the end we couldn’t cope with demand.

“We received a marketing email from Biesse and the timing couldn’t have been better. We visited their Tech Centre in Daventry for discussions about production methodology and volumes, which were backed up with machine demonstrations.

“We’d always gone down the cut, edge and drill route and Biesse guided us through this process, introducing us to new machinery which included a Selco beamsaw with twin pusher, Akron edgebander and a Skipper V31 point-to-point drilling machine for the gables.”

Technical director, Dan Hattersley, comments: “The star of the show is definitely the Selco SK4 beamsaw with twin pusher. Rather than having the three panel saws with five men, we now have one beamsaw with one man and a massive increase in output. We’re now processing 50 sheets per day.”

“Which is great,” continues Stuart, “but for us the most amazing thing is that we’re saving £300 per day on waste through more efficient use of material with Biesse’s Optiplanning software.”

The Akron 1300 edgebander and Skipper V31 were sound investments, which helped to keep pace with the output from the beamsaw and provide an accurate and consistent quality across the manufacturing range. 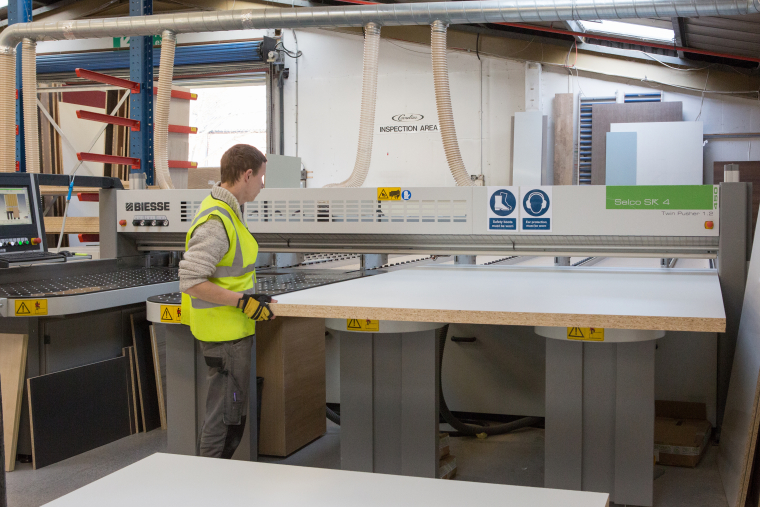 “One of the other deciding factors in our decision-making process was Total Care, Biesse’s five-year warranty and service package,” continues Dan, “it underpins the confidence in the quality of the machines. Without doubt, Biesse’s solution has made us much more efficient and not only helped us to cope with the demand for kitchens, but also helped us to move into the bedroom market.”