Some things in life are just meant to be together; such as strawberries and cream or apple strudel and vanilla custard; and this is the philosophy behind the new Schelling UK trader partners – Votecs shredders and Barbaric lifting systems were both carefully chosen as complimentary partners to the Schelling UK saw range.

Philip Darbyshire, managing director of Starbank Panel Products picks up the story: “For Starbank it would have been very easy to rest on their laurels and once again congratulate themselves on a good year of sales. However this is not how Starbank works, their joint goal is always to continue with product development, along with new improvements in production machinery.

As Markus Freuis, managing director of Schelling UK comments: “The more you have, the more options you can give customer, and the more individual tastes you can cater for.  It was at this point that Starbank realised the additional value and benefits of sourcing more products from one trusted supplier. As the current owner of two Schelling fh6 cut-to-size saws and a VS16 Board Storage System, Starbank was very familiar with the good service levels delivered by Schelling UK. This gave them the confidence and trust to buy new products from Schelling UK. 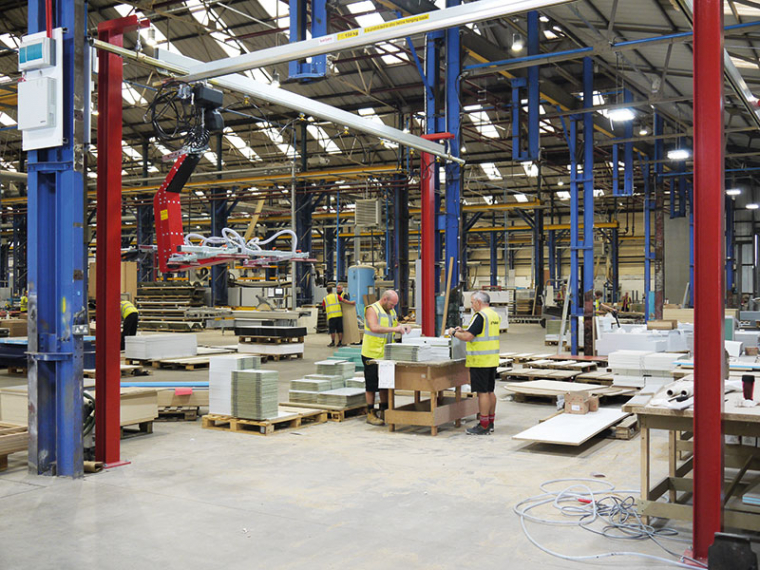 Barbaric GmbH – founded in 1995 – is proud to partner with Schelling UK to deliver intelligent lifting and storage systems across the United Kingdom. According to Markus: “It is our aim to offer individual lifting solutions to our existing customers all of whom already have trust and confidence in Schelling UK.”

According to Lis Burrow Chartered MCIPD, Grad IOSH, health and safety manager at Starbank: “The human back is vulnerable to manual handling injuries however the Barbaric lifters drastically reduce the potential problems with repetitive strain injuries because cranes do the heavy lifting, they remove strain on the operators, which reduces risk of injury, while reducing worker fatigue.” 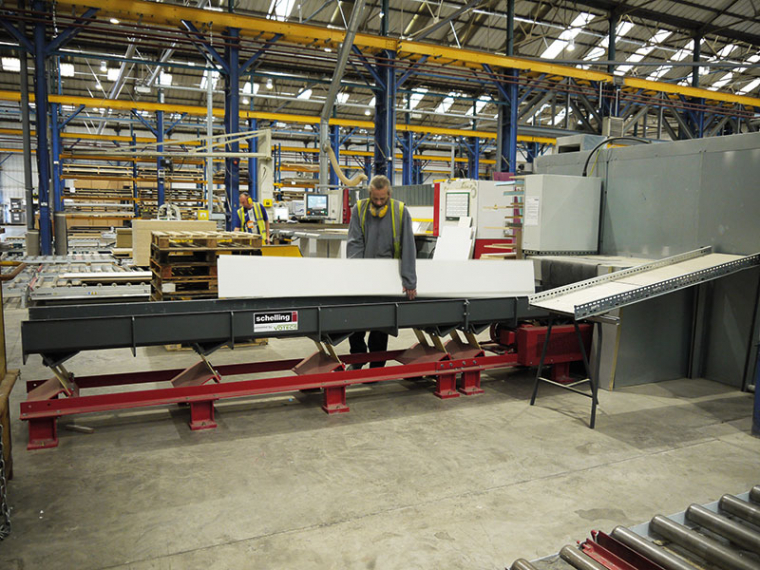 Previously the Shield fire-rated doors – which weigh approximately 90kg – were manually handled by three men during the edgebanding process. But now two Barbaric SSK Pillar jib cranes have been positioned at either end and the whole operation only requires one man.

The new process has been made easier and faster with the Barbaric lifters. Another benefit of the Barbaric B3 DL Door lifter is its ability to rotate doors 180° which helps reduce the risk of scratches, improves production time and reduces manual handling during the process.

“In co-operation with Starbank, Schelling has designed a customer specific solution which has delivered a more functional workplace,” commented Markus. 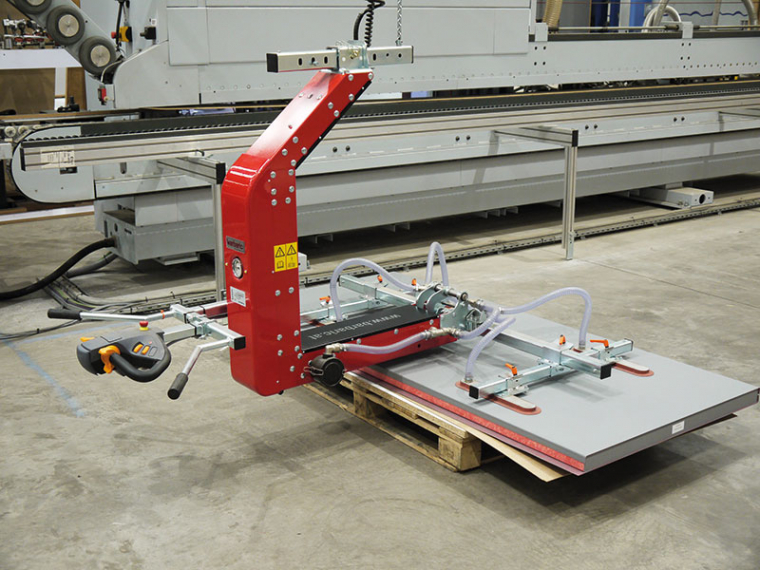 Also purchased by Starbank was a Barbaric SSY light crane system with a B3 DL door lifter which allows quick and nimble movement of loads within a smaller area.

This highly adaptable 7.5 x 5m system is located in the packaging area and because the bridge crane is equipped with lateral guide rollers there is complete movement across and along the whole 37.5m2. The 180° turning facility of the lifter allows doors handles and glass to be fitted with ease, by just one man.

Paul Atkinson, Starbank production director, comments: “During the research phase, we noticed other compressed air lifter manufacturers were slightly cheaper however when we investigated the overall life cycle costs of the Barbaric system which uses a single phase 240v 13amp supply without the need for constant compressed air, the Barbaric system proved more cost effective.” 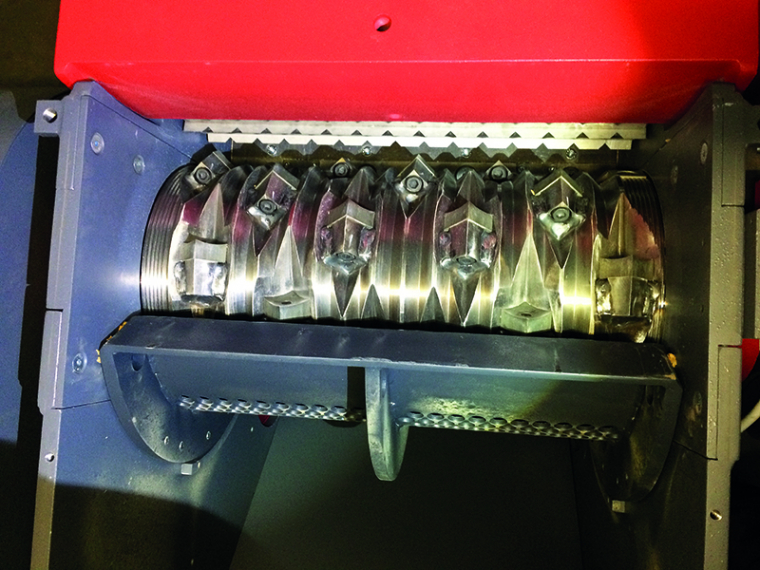 Due to the compact size of the VHZ horizontal shredder it fits neatly beside wood processing machinery, the operators feed material, up to 5m long, directly onto a vibrating conveyor which feeds the shredder.

Its compact size means it can be used directly alongside the saws so that it effectively automates the recycling element of the manufacturing process. The saw operators are “made up with it” because previous they had to break up long trim cuts into smaller lengths to fit into bins which were later transported by a forklift truck to a central shredder all of which took additional time and energy.

Philip and Paul at Starbank have long realised the potential benefits which smarter machinery can provide, such as better material handling which is one of the reasons why they purchased the Schelling VS16 board storage system. 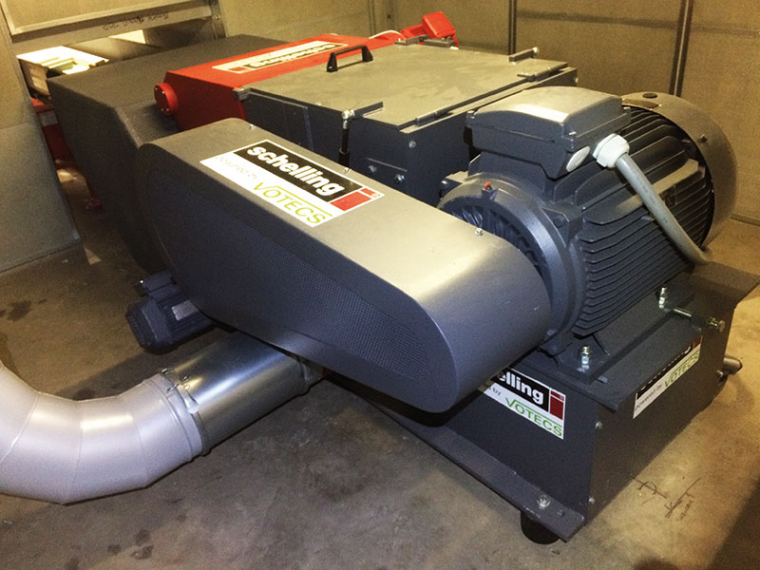 This principle also lead them to purchase the horizontal Votecs shredder because it saves the operators time, energy and manually handling waste material unnecessarily. Not to mention the discharged wood waste material is a precious resource to Starbank because it is extracted to holding tanks which is later used to heat the offices via biomass boiler system - and ultimately this is also better for the environment.

With a 45kW motor and a 354mm diameter v-profiled rotor running at 650rpm it shreds its way through a minimum of 2.3 tonnes per hour of waste, producing chipboard and MDF shavings of 15/20mm. And because the V rotors are manufactured from one piece they are particularly torsion resistant, not to mention the fact that the knife holders are welded around the circumference of the profiled rotors all this adds up to a very fast and efficient shredding machine. 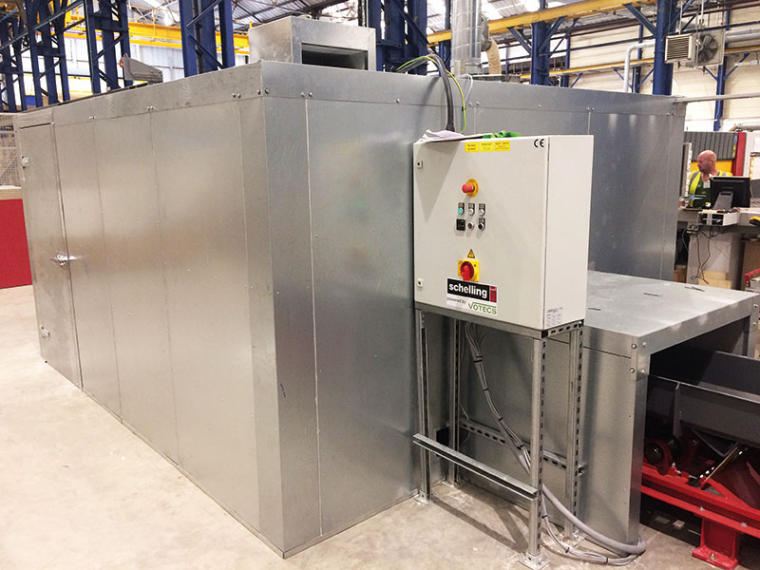 According to Paul Atkinson: “Due to the close proximity of the two Schelling saws we knew it was going to be  a noisy operation for the saw operators, so to minimise this the Votecs shredder was built on rubber anti-vibration feet and an acoustic booth was built to surround the shredder”.

Paul adds: “Let’s face it, it’s challenging to see where new opportunities for production improvement may lie, but it is part of our continual investment in the latest technology.”

To see a working Votecs shredder and a Barbaric lifter, visit the Schelling UK showroom in Wetherby.