HMS Joinery, based in Newcastle under Lyme, was set up in 1990 and grew to a workforce of 30. Although it became successful in winning contracts from national house builders, the staff, including owner, Harry Murray, were regularly working seven days a week in order to get the work out.

“Using traditional methods to make staircases is so labour intensive, we had to come in every day to keep up with the orders, which was taking its toll on everyone,” says Harry.

“Due to all the overtime that was being paid out, it was eating up the profits, the long-term future of the business looked uncertain,” he adds.

The turnaround in HMS’s fortunes began when it bought a Masterwood Atlas XL CNC machining centre in 2002. It took over the production of the staircases, replacing a semi-automatic trenching machine and the need for other tasks to be carried out by hand. It boosted profitability by more than 30%, and by cutting out the need for substantial amounts of overtime it still allowed a 40% increase in production.

It used to take a day to produce a standard staircase with kite winders, which was now being done in about three hours.

In 2005 the company was producing between 50 and 60 staircases per week, based on five and a half working days, with minimal overtime.

The CNC was supplied with MasterStair, Masterwood’s own CAD/CAM software for the quick and easy design of staircases, producing drawings, cutting sheets, and a CNC program for each component.

As well as being ideal for bespoke work, the MasterStair software really comes into its own with batch staircase production. “The bottom line is that we are saving hugely on overtime payments, which has made the business far more profitable,” says Harry. “Our customers are impressed with both the fast service we now provide and the first class quality of work. We can now take on large batch orders with confidence, knowing that we can meet the delivery dates. We are able to build up batches of stairs in advance, we are no longer constantly working under pressure.” 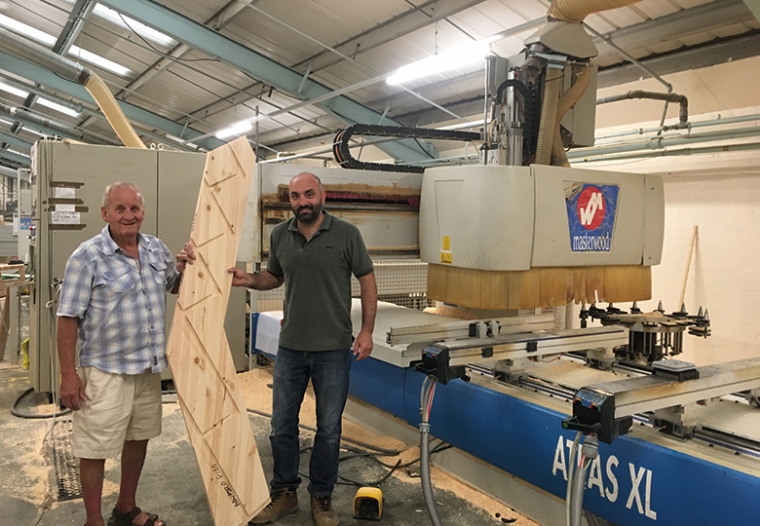 When the recession hit the house building market in 2008/2009 there was a big drop in demand for stairs. Like many large manufacturers, HMS had a hard time finding the same level of work that the factory was geared up for.

In mid-2009 the company changed to HMS Staircases and added a second CNC, a Masterwood Project 400. This was to a higher specification so that it could be used for other products like windows, doors, as well as stairs.

Within a short time of the second machine arriving, the house market started to grow again and it was back to more and more stairs.

Following various discussions in 2017 between HMS and Masterwood it was decided a third CNC was required as the company was now back working 24/7 to keep up with its orders.

Before the third machine arrived a new factory became available in nearby Stoke-on-Trent, the new Project 460 was set up here in August 2017 and over the following months machines and work was gradually moved from the old factory to the new.

The new workshop has allowed the three Masterwood CNC machines to be in a line producing all the strings, newels, winder and special treads, plus newel caps from the string offcuts.

“The new works has allowed us to increase production due to the better layout and more space, everything has become more efficient” says workshop manager Craig Avramovic. Separate rooms now set up allow balustrading to be fully assembled and a new spray shop has also been added.”

The Project 460 is a 5200mm bed length and can take tooling up to 250mm diameter, plus other options including a horizontal router, a fourth axis – extra tooling positions can easily-added at any time if found to be required.

The new machines are all lined up now with the centre machine being the 16-year-old Atlas K that still works away every day.

Masterwood has worked with the customer to put together a video of the new works showing the whole stair production from materials arriving to the finished stairs being loaded for delivery. This will soon be available as a link from the Masterwood YouTube page.