Dust Control Systems (DCS), now part of Absolent Group, has completed a major upgrade of the dust extraction system at the premises of one of the UK’s premier kitchen furniture manufacturers – a company steeped in manufacturing heritage.

Coventry-based manufacturer, Burbidge & Son Ltd, has been involved with the production of wooden kitchen furniture since the early 1970s, but the company’s history in woodworking manufacture dates back over 150 years, and five generations of the Burbidge family.

It all began with Henry Burbidge, back in 1867, primarily manufacturing turned wooden products for a variety of diverse industries; bobbins for local textile companies, bannisters and newel posts for the building trade, and sports goods such as cricket stumps and croquet mallets for a customer list that included Slazenger. 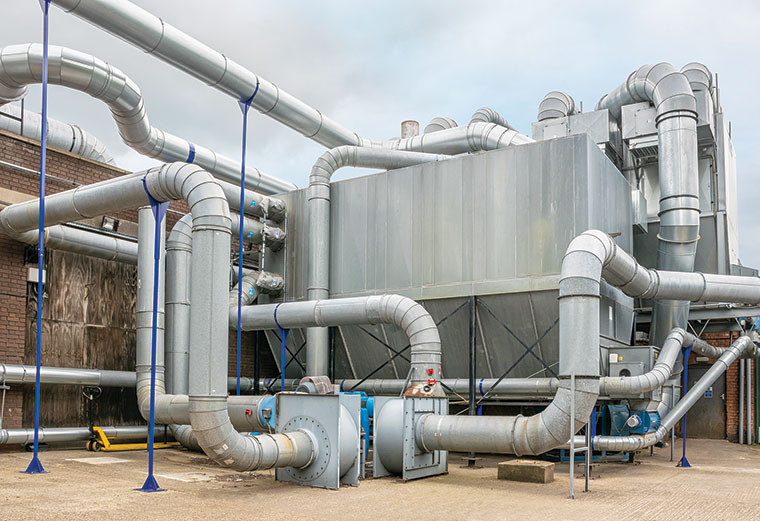 Four out of six extraction fans and two of the three filter units remain to provide an air volume capacity in excess of 85,000m3 per hour

Other strings to the company’s manufacturing bow have included goods for the musical instrument market, with items such as recorders and drum sticks, and even more offbeat with the production of stiletto heels, wooden handles for electric kettles, and even solid wood toilet seats for Harrods.

By the 1990s however, Burbidge had grown to be one of the UK’s leading kitchen furniture manufacturers and now, almost 30 years later, the company is still drawing on its rich woodworking heritage, still family-owned, and headed by Ben Burbidge; Henry’s great, great grandson.

With previous first-hand knowledge and experience of the capabilities DCS had in the design and installation of dust extraction systems for the woodworking industry, and especially in the kitchen furniture manufacturing sector, Burbidge’s operations director, Mike Procter, had no hesitation in contacting them to evaluate the company’s requirements and to explore possible options for bringing the system up to date. 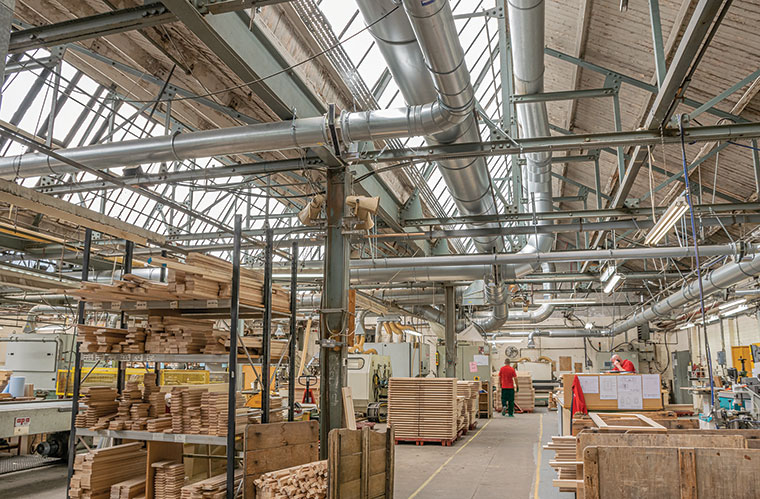 We had decided the time was right to review the whole extraction system with a view to improving its overall efficiency, as well as ensuring optimum safety standards were being achieved, and I was also keen to explore the possibility of including Ecogate technology at Burbidge to, hopefully, make some cost savings,” says Mike.

“Over the years, the company’s expanding collection of woodworking machinery has inevitably led to the situation where we had multiple fans and filter units, serving all areas of the factory, and all working at full power, all day, every day.”

A site visit by sales director, Andy Hives, to review and appraise the existing extraction system confirmed that, although the system’s capacity was fully meeting all statutory health and safety criteria, there was considerable scope to improve efficiency and the potential to realise significant cost savings as well.

Fume extraction from the company’s Cefla paint line was still required on an almost continuous basis but, in common with most furniture manufacturers, the Ecogate energy survey carried out at Burbidge revealed that only a small number of the dust-producing woodworking machines in the factory were ever in operation at the same time, and so dust extraction was only required on a partial basis.

“Excluding the paint line,” Andy explains, “the survey showed that the maximum extraction volume required, at any given point in time, was only two thirds of the volume currently being extracted to the three externally-sited filter units. Effectively, one of the three filter units was surplus to requirement, and could be removed altogether.”

DCS decommissioned the redundant filter unit and reconfigured the extraction system; instantly reducing power consumption by 120,000kW hours per year by the removal of two 37kW fans. Although some existing ductwork was retained, new FastClip ductwork was installed throughout the factory, and automatic Ecogate motorised dampers were installed to serve each machine. In addition, extraction was provided at a further six ‘push-to-run’ machine clean-up points. 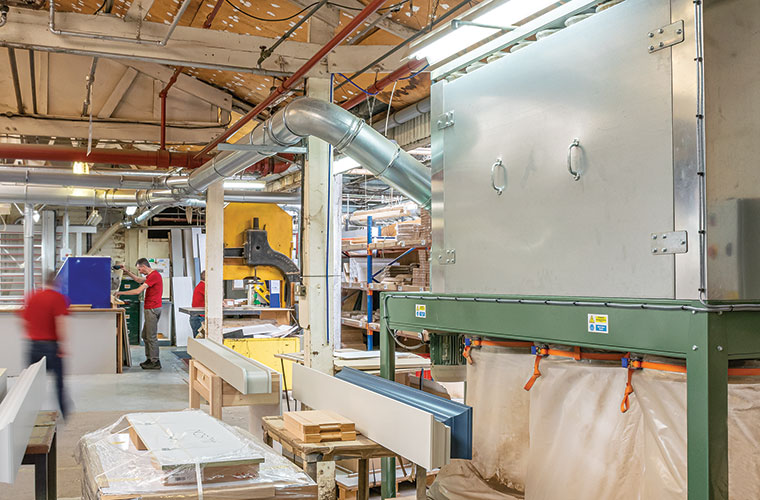 A new 5.5kW bag filter unit, installed to serve the accessory manufacturing area, provides extraction for a variety of small machine tools which have been fitted with extraction hoods manufactured by Gallito

An Ecogate system exploits the laws of physics, and a relatively small reduction in fan speed can generate disproportionately larger reductions in power consumption.

At Burbidge, the new extraction system is capable of removing just over 85,000m3 of dust-laden air every hour, which is over 30,000m3 per hour less than the previous system, and it’s this reduction in volume that translates into reduced energy use and cost savings. The predicted savings to be made by installing Ecogate technology on the reconfigured system add up to a further 122,000kW hours per year; giving a total saving of over 242,000kW hours in the first year following installation, which represents a 55% reduction in total annual power consumption.

Installing the Ecogate technology has delivered more benefits than simply reducing the company’s electricity bills, confirms Burbidge’s production manager, Tim Foreman: “The Ecogate system and extraction installation work has made a significant difference to the factory environment; there’s much less air being removed from the building now, and we also have warm, filtered air returned to the factory, so it’s much easier to keep the place warm and, with fewer fans in operation it’s also much quieter.”

In conclusion, Mike Procter added: “Our spend on electricity has reduced, and the new ductwork has smartened up the appearance of the factory, but I was also very impressed with how DCS managed the project; they stuck to the agreed plan, which was detailed on a chart showing the work schedule for each day, and ensured the least possible disruption to our production.”0800 040 7116
www.DCSlimited.co.uk