Established in 1982, Ian Firth Hardware has grown to be one of the UK’s leading suppliers of internal door kits and external door sets along with hardware products, serving all the major house builders throughout the country. From humble beginnings working from the family home, founder (and now chairman) Ian Firth started out supplying local builders and tradesmen with ironmongery. Fast forward nearly 40 years, and the Dewsbury-based company now operates from a large, modern manufacturing facility with purpose-built offices and warehousing, employing over 100 people. 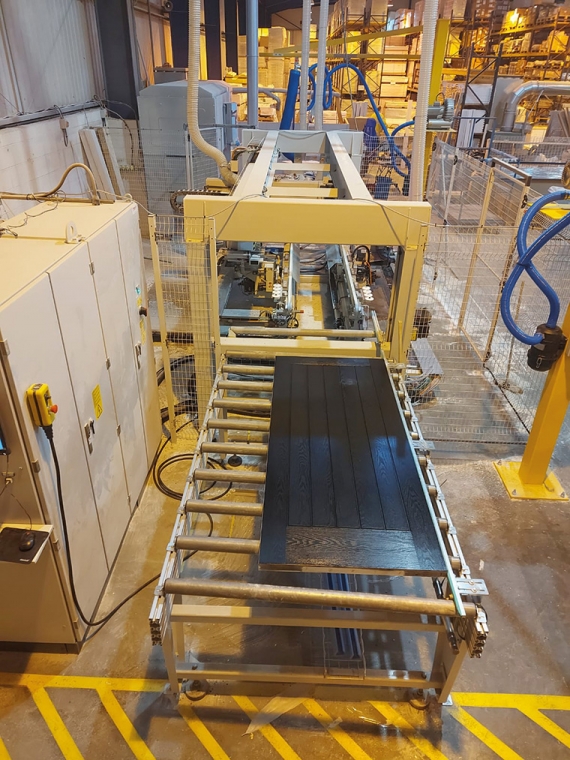 In 1988, Firths branched out and started selling patio doors, garage doors and internal doors. Such was the success of these new products, that the company further expanded into composite doors (both steel and GRP faced). Again, sales grew steadily YoY, reaching record levels in 2019.

To keep pace with demand, it was clear that a significant investment in new machinery would be needed, and it fell to commercial director Robin Firth, operations manager Nigel Robinson and production manger Mark Pickets to research the market for suitable equipment. 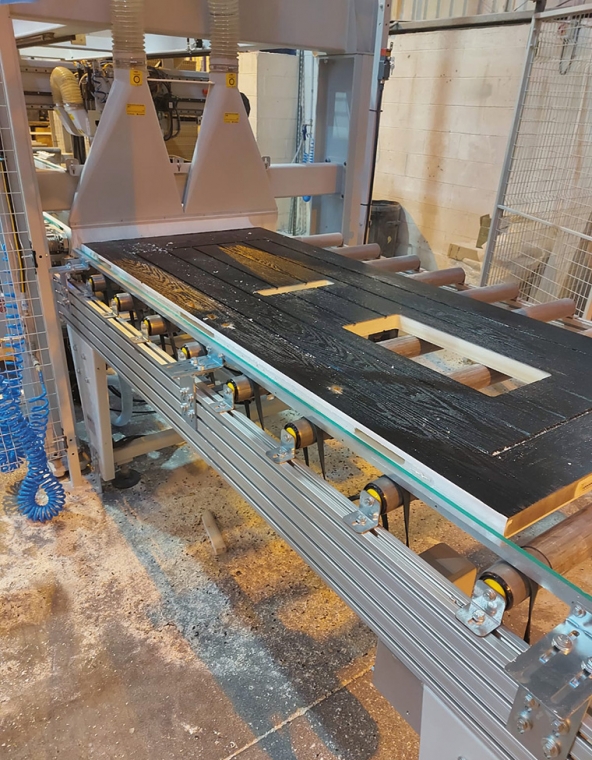 Nigel comments: “The easiest thing for us to do was to install another CNC rail-and-pod machine. We already have three machines, and they can do what we need up to a point – but in order to reach the required output levels we needed to move in another direction.”

As a result, Nigel contacted JJ Smith, which had already supplied Ian Firth with machines for door and frame production which had served them very well.

A site meeting was set up with Paul Parker, who carefully reviewed what was needed and talked through the options with Robin, Nigel and Mark. 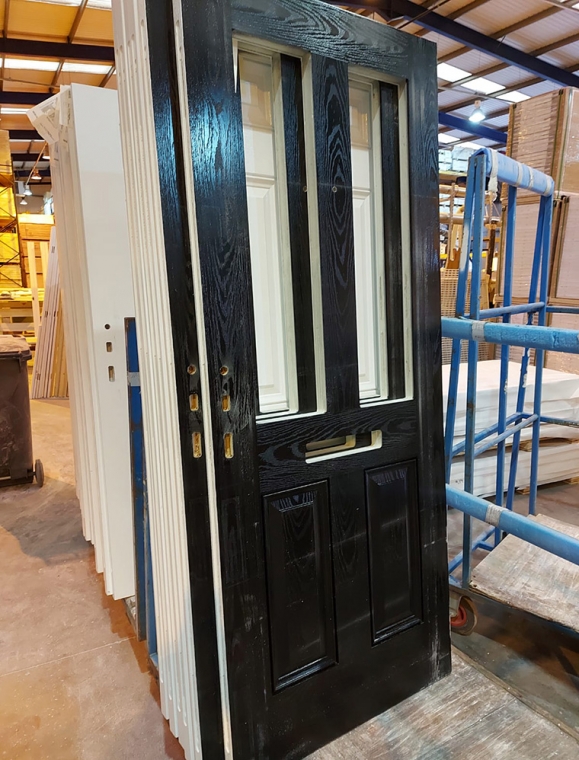 It soon became clear that the machine that ticked all the boxes was an Essepigi model Doormatic CNC throughfeed machine. A detailed quote was put together for a double-sided Doormatic equipped with automatic infeed and outfeed, two horizontal routing spindles for face plate and lock case machining – to suit Winkhaus locks – and on the opposite side, two horizontal routing spindles for hinge recessing and spot drilling for the screw holes. Also specified were two vertical electro-spindles for cutting out vision panel apertures, letter box slots, and drilling for the spy hole and lock bolt. 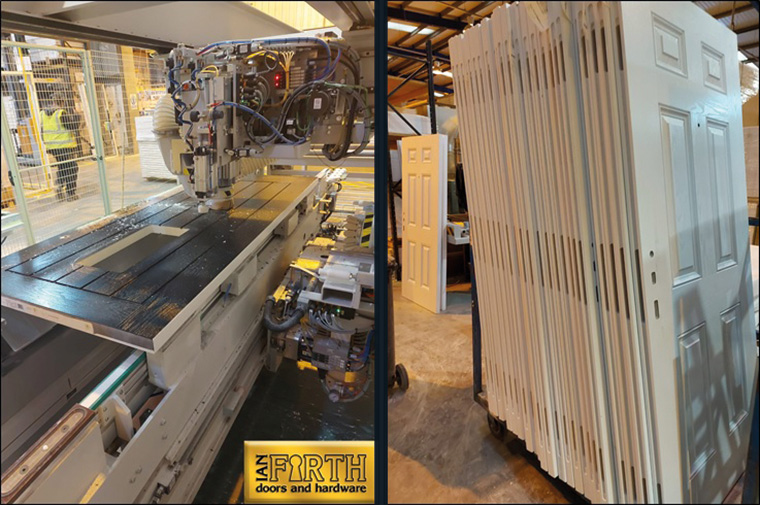 The main advantage the Essepigi Doormatic has over standard CNC routers is that all operations are working simultaneously, which obviously significantly speeds the process up. With the automatic infeed and outfeed system, a door is ready  to be loaded while another is being machined and a finished door is on the outfeed ready for unloading, without any downtime. After attending an on-site demonstration in the UK at another company processing fire doors, and using the boomerang system for one-man loading/unloading, an order was placed.

The Doormatic was delivered and installed on schedule, and it has now been in operation for over three months. 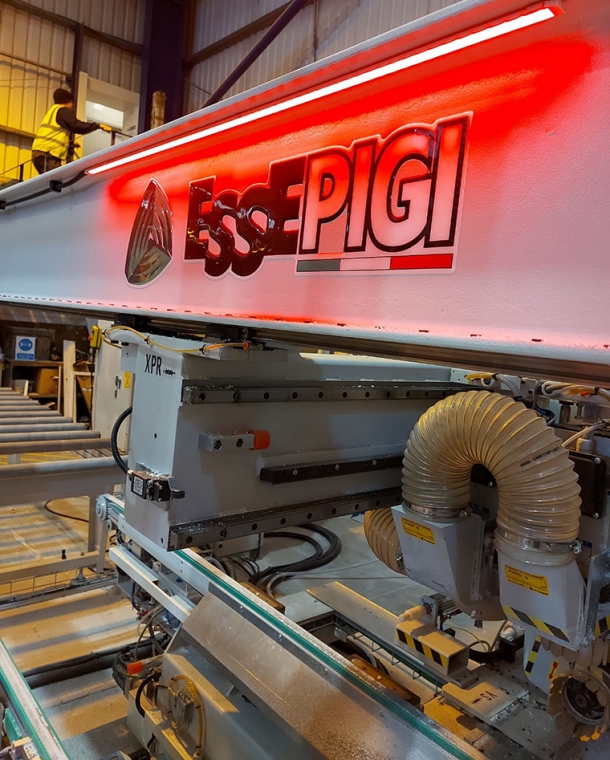 Mark comments: “Production-wise, it is exactly what was promised and what we had hoped for. We can normally process approximately 40 doors on each of our existing twin-bed CNC machines. With the new Essepigi we can now process between 100 and 120 doors per shift, depending on the complexity of the machining operations.

“In addition, the actual programming is much simpler and quicker to follow, thanks to the pre-installed macro templates.”

Robin Firth concludes: “We are extremely happy with the Doormatic, which was expertly installed by the JJ Smith technicians. It has given us the additional capacity we needed to help ensure prompt, on-time deliveries to our customers, which is crucial to us.”