Verco counts on Biesse to deliver on Covid-safe desking contract

When office furniture designer and manufacturer Verco secured one of its largest ever orders – a special desking project for the UK Government – it knew it could only deliver on time if it could rely on the performance of its Biesse machines.

Biesse rose to the challenge, providing responsive engineering support and rapid online troubleshooting to meet Verco’s ambitious uptime targets. Fulfilling the exacting terms of the contract and delighting the customer, 5500 MFC desk positions with Covid-protective MFC/Perspex and glass screening were delivered by the end of March. 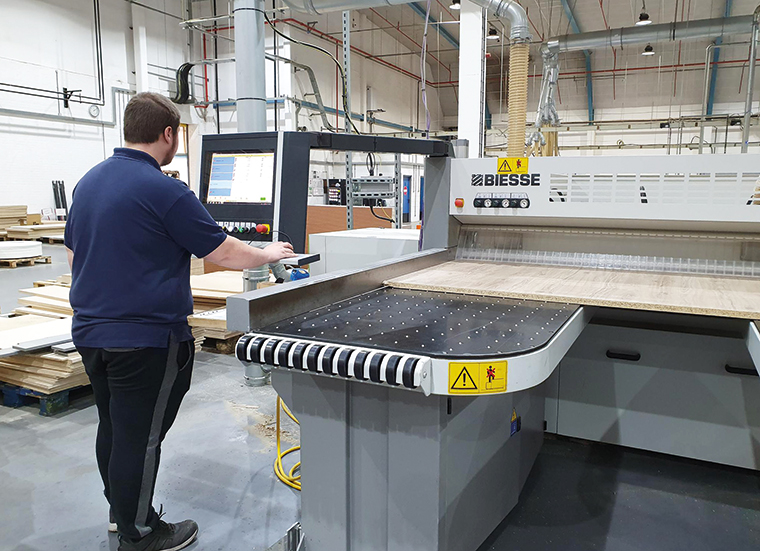 A seat in the capital

Verco has a rich heritage in furniture making that stretches back more than a century, when High Wycombe was known as the chair making capital of the world. In the 1960s, the company’s focus switched to office furniture, primarily seating, and recent history has seen Verco investing in CNC machinery from Biesse to develop its panel furniture business.

Verco’s first Biesse purchases were two second-hand machines: a Protec (built in 1999) for large panel processing and a smaller Rover 380 (built in 1992). Both are still in use by Verco today – testament to the longevity and build quality of Biesse machines.

“These were our first introduction to Biesse, so when we subsequently looked to purchase new machines we called them in to have a chat. When compared with other brands, Biesse’s machines were more competitive from a technical and pricing perspective,” says Peter Mitchell, production director at Verco.

These early models have since been joined by several other Biesse machines, including a VIET sander, Selco beam saws, Rover A Edge edge-banding CNCs and its newest purchase – a Rover A FT flat-bed router.

Housed within Verco’s 40,000 sq ft woodworking mill, this battery of furniture making equipment, in conjunction with a highly skilled and dedicated workforce, has established Verco as a leader in high quality commercial desking and table products. 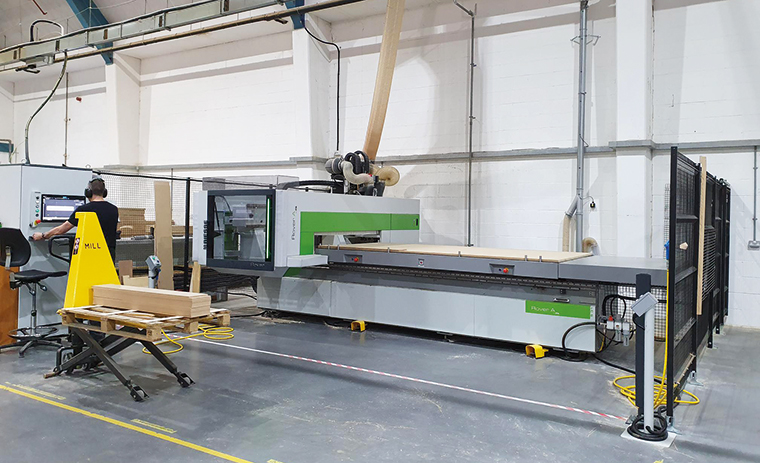 In summer 2020 Verco was approached with a view to designing and manufacturing 5,500 work stations, incorporating more than 25,000 MFC panels and 13,000 Perspex panels, to create a Covid-safe working environment.

One of the largest ever contracts in Verco’s 109 year history, there was a lot riding on this project. Even before the contract was awarded, Verco had to secure its supply chains, commit to materials and make the logistical arrangements to pack 1000 tonnes of desking into special desk-unit stillages and deliver them to a central distribution warehouse.

The scale of the order meant Verco would have to pull out all the stops to guarantee on-time delivery of the desking. This would entail operating an extended shift and moving to a six-day week for the duration of the contract, and even then, any machine downtime would jeopardise Verco’s ability to complete on time. 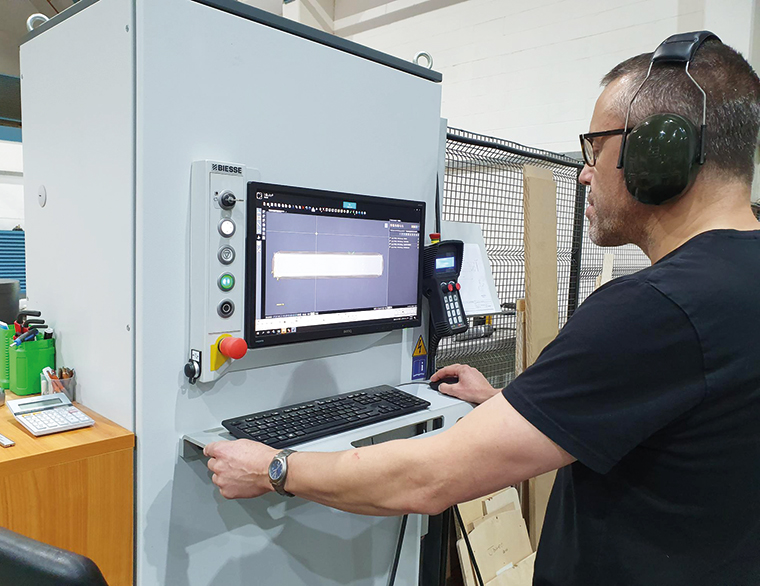 “We were very aware of the magnitude of this project and the fact we had very little time to make all the components,” explains Peter. “This challenge was compounded by the complexity of those components. Some of them needed secondary machining in terms of sizing, edging, shaping, routing and shape-edging, which are difficult but essential to get absolutely accurate all of the time. We knew we were going to have to rely heavily on the repeatability and reliability of our machines as we simply wouldn’t have enough time to make the job with any downtime.”

He continues: “Two machines that were absolutely crucial to the success of the project were the Rover A Edge machines, because we couldn’t perform shaped edge-banding with the same accuracy, repeatability and quality on any other machines, especially in the quantities required. Therefore guaranteeing uptime for these machines was paramount.” 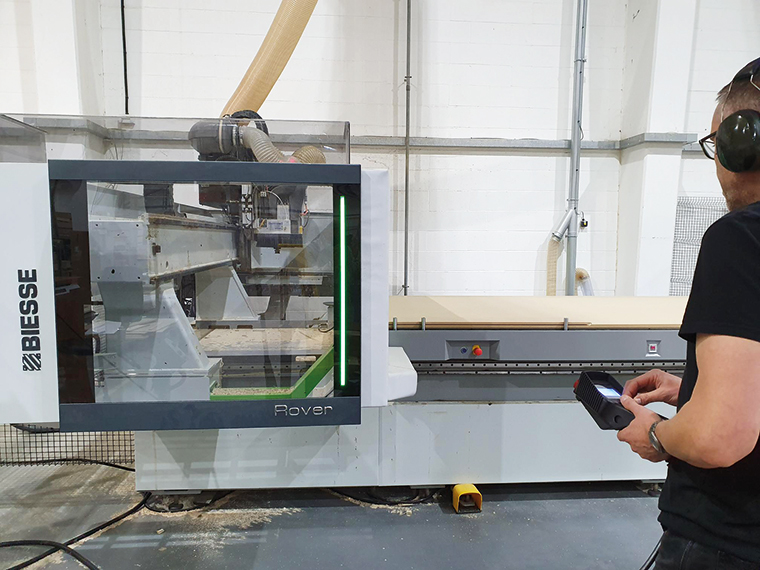 With this in mind, prior to the contract being signed off, Verco sought Biesse’s assurance that it would respond swiftly in the event of any equipment issues.

With the client delighted with the prototypes that Verco designed, it was all systems go from mid-November. From then on, with only a few breaks in between for Christmas, six 45ft artic’s left Verco each week for the next 11 weeks.

All hands to the deck

“Staff were seconded from all areas of the business to work on this project. Everyone engaged with the fact it needed to be done. They were all under full employment at that time which they were pleased about, and employees in the mill were working long hours – 6am to 6pm – and doing lots of overtime,” says Peter.

During this period, several of the Biesse machines were working flat out, including some of the  oldest ones.

“Even the big old Protec had its part to play,” recalls Peter. “Some of the panels we were handling were 1800 x 2100mm, so the Protec was ideal for the precise edge saw process. We were able to do some of the shaping and some of the edging on the Rovers and then move onto the Protec for the saw cut, which was a more efficient way of working.” 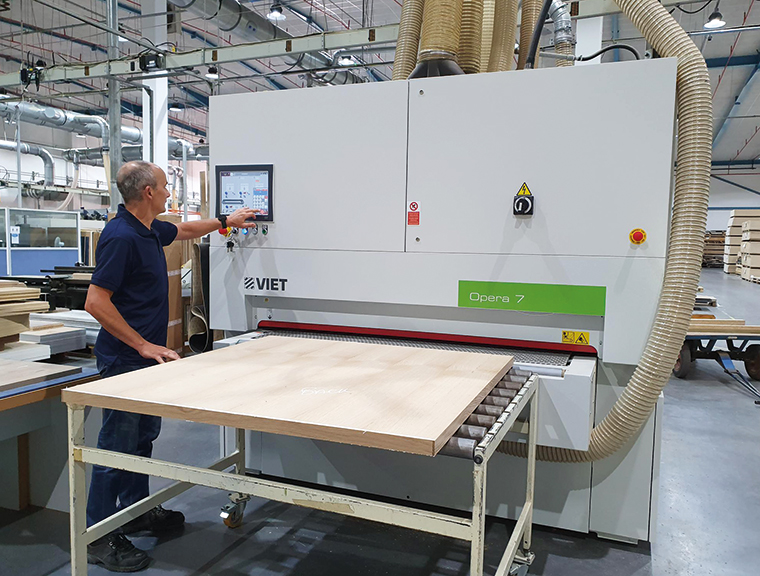 During this project, Biesse’s remote troubleshooting capabilities played a vital role in keeping downtime to a minimum.

“The benefit of an engineer identifying a problem on a machine remotely and correcting that problem remotely is speed. If issues can be sorted without a site visit that is better for everyone,” says Peter.

The latest machine purchased by Verco incorporates SOPHIA – Biesse’s IoT platform. This gives Biesse a ‘window’ into each installed machine via a continuous connection with the platform. Users can call for assistance via an app and Biesse’s engineers will diagnose and resolve issues remotely.

“SOPHIA makes a big difference in so far as being able to identify where there are problems,” notes Peter.

During the project, any issues that couldn’t be resolved remotely were dealt with efficiently on-site by Biesse’s engineers, according to Peter, who praised Biesse’s response as “positive” and engineer attendance as “on-time and effective”.

By the end of March, all four phases of the ambitious programme had been delivered on-time, with the product passing the Government’s stringent procedures.

“The customer was extremely pleased with our performance, which was a tremendous boost for our workforce who had put their all into what was one of the largest single orders in the history of Verco. Biesse’s support was key in keeping production on track and on time and their engineers should be applauded,” says Peter.

‘The benefit of an engineer identifying a problem on a machine remotely and correcting that problem remotely is speed. If issues can be sorted without a site visit that is better for everyone’