Drawing on personal experiences, discussion and the current news, it is easy to paint a picture of how the trade has performed over recent years – but what do the official figures say? FIRA’s new statistical digest provides a summary of how the UK furniture industry is performing, distilling data from a wide range of sources to identify the manufacturing, spending and trading trends that have dominated the sector. Furniture News presents an exclusive summary …

Published in December last year, the report covers 2013-16, and includes some estimates for how 2017 will be recorded, and beyond. Drawing on data from Government bodies such as the Office for National Statistics, HM Revenue and Customs, Communities and Local Government, plus the Bank of England, FIRA’s digest provides one of the clearest available pictures of the industry. 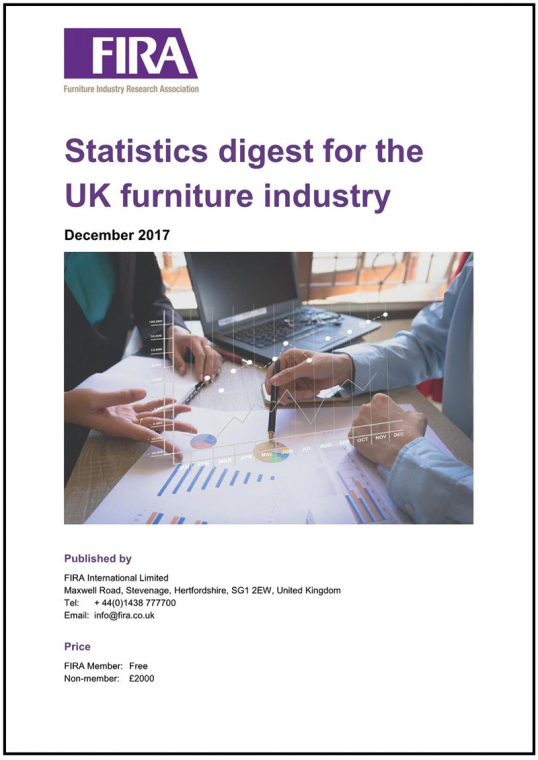 Here are the key findings …

The UK furniture and furnishings sector

The UK furniture and furnishings sector – comprising design, manufacturing, retail and repair – is much larger than many people think. Total manufacturing turnover in 2016 was £11.28b – the largest proportion of which was furniture manufacturing, at £8.35b.

This turnover emanated from 8390 companies employing 118,000 individuals, and reflected a YoY increase of +2.6%. 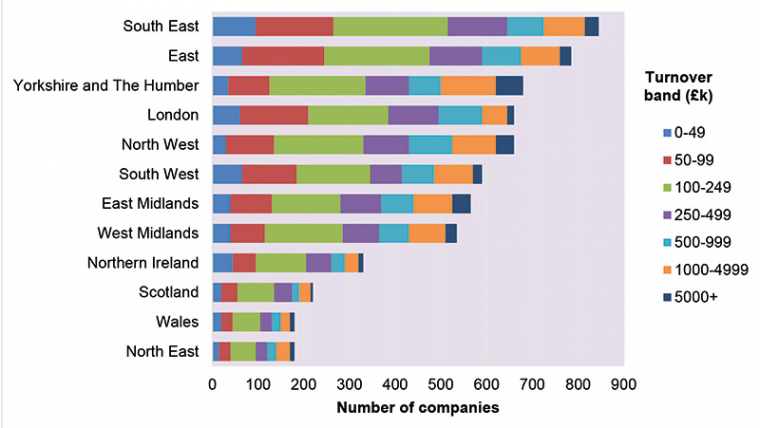 Number of furniture manufacturers in turnover bands by region

“At this stage I don’t envisage massive reductions in the number of jobs within the whole sector in coming years,” says the report’s author Pete Beele. “There could be some losses with increased capital investment in equipment, but counteracting this there is evidence of more companies starting up, plus an increase in turnover – both of which should improve job opportunities.”

Total net unsecured lending continued to rise into 2017, with the latest data (March 2017) indicating an outstanding value of £299b – +10.7% more than the outstanding net lending figure of £270b in March of the previous year.

In addition to the above, there has been a gradual rise in lending secured on dwellings, which increased by +2.7% from the end of 2015 to the end of 2016, when it reached £1321b. Preliminary data for 2017 shows that this figure increased to £1354b by September last year.

These increases in new homes (no matter how small) will potentially generate domestic furniture sales. However, putting this into context, annual dwellings starts remained well below those recorded in the four years prior to the 2008 financial crisis, when they were typically of the order of 220,000-235,000.

Whilst the number of non-residential property transactions remained relatively buoyant, the residential market virtually stagnated.Total transactions reached 1.4 million in 2016, and whilst a gradual upward trend has still continued, the pre-2008 figures of around 1.7 million have yet to be equalled.

The latest data shows that furniture and furnishings sales continued to rise into 2017, with first and second quarter consumer expenditures being respectively +5.9% and +5.4% higher than for the equivalent periods in 2016.

Total provisional UK furniture manufacturing turnover in 2016 was £8.35b, which was +4.5% higher than the previous year. Data up to and including September suggests that turnover in 2017 could be +3% greater than in 2016, although more recent anecdotal evidence points to more challenging market conditions in the last quarter.

2016 data suggests that this was just a blip, with turnover increasing to £2.00b, which equated to a massive +17.8% increase on 2015. This increase was larger than might have been expected, and it is difficult to judge whether it was all attributable to the market, or whether it was partially due to data reconciliation issues.

The rest of furniture manufacturing comes under the heading of ‘other furniture’ in the digest, and comprises the largest of the industry’s four subsectors. In 2016, turnover in this subsector – which includes upholstery and cabinet furniture – reached £3.37b, which represented a +1.7% increase over the 2015 figure of £3.32b.

This broad subsector has a significant influence on UK furniture manufacturing’s overall performance figures, accounting for 40% of turnover. As such, any recovery in turnover here normally reflects the overall position for the whole furniture sector.

However, the increase for the whole sector from 2015-16 was much higher (at +4.5%), with the apparent large improvement in performance in the kitchen sector clearly influencing this overall increase.

Furniture manufacturing is dominated by micro- and small- to medium-sized businesses, with only 285 companies (4.6%) operating at turnovers in excess of £5m.

Just 140 companies turn over more than £10m. This number is slightly higher than the previous year, which indicates that some of the larger companies have continued to grow. “From a general business point of view, there is always a drive for companies to grow – either organically or by acquisition,” says Pete.

“However, the data also suggests that there were more companies in 2016 than in 2015 – so for every merger there has also been a number of new starts, predominantly at the lower turnover level.”

The latest data indicates 6230 companies in the sector, compared with 6155 in the previous year. Most of this growth has been in the number of companies turning over less than £1m, although there has been a slight increase in the number of organisations in the £2-5m bracket, which is assumed to be due to growth rather than new entrants.

There is a significant proportion of extremely small companies within the whole furniture manufacturing sector, with 56.0% of organisations operating at turnovers of less than £250,000.

In the mattress and office and shop subsectors, the percentage of smaller companies is lower than for the other sectors (54.8% and 68.5% within these sectors, respectively, turn over less than £1m). Conversely, in the other furniture and kitchen sectors, this is higher, at 86.4% and 84.4% respectively.

The mattress sector has proportionately more large companies than the others. 19.4% of companies turn over more than £5m, compared with 10.5% for office and shop, and 3.1% each for the other furniture and kitchen sectors.

Imports of furniture into the UK in 2016 increased to £5.8b compared with the previous year’s figure of £5.4b. This equates to 42% of the home market for UK furniture manufacturing (including add-on services). Indications for 2017 are that furniture imports could reach £6.5b, which would equate to about 1% of all UK imports. 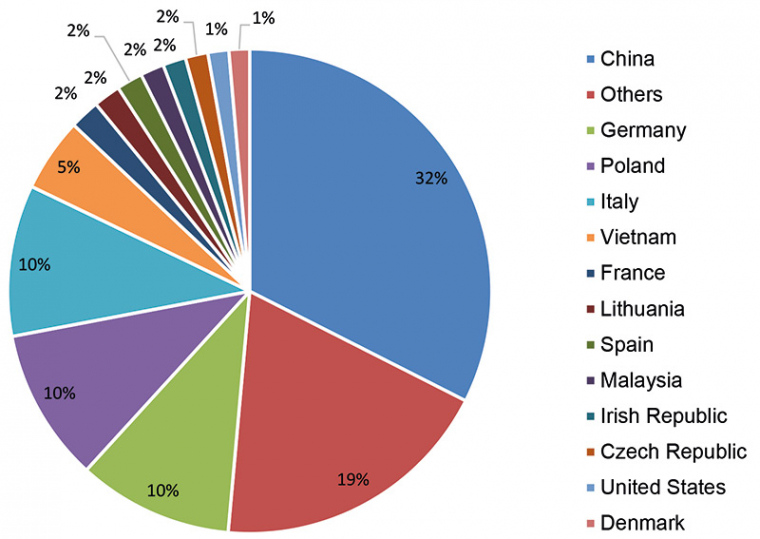 Furniture imports into the UK, 2016

In pure financial terms, Italy lost its position of second in the hierarchy of furniture exporters to the UK, being overtaken by Germany and Poland, respectively. However, each of these countries roughly accounted for 10% of furniture imports into the UK, at about half a billion pounds each.

The value of 2016 imports from the European Community was £2.9b – an increase on the previous year when it was £2.6b. 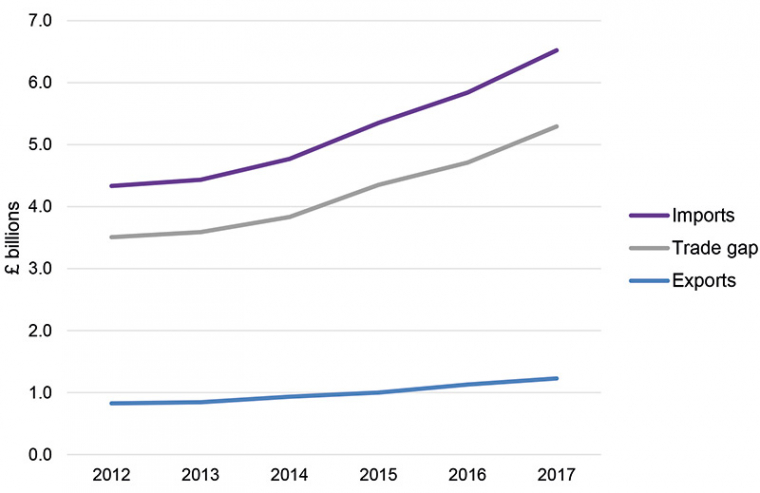 Furniture exports have gradually increased in recent years, from £0.83b in 2012 to £1.13b in 2016. This equated to a +13% increase from 2015-16, which is a greater percentage increase than the +9% figure for imports over the same period. However, in pounds sterling, this increase of £0.13b in exports was somewhat smaller than the £0.48b increase in imports.

The prediction for 2017 is that exports will continue to increase and could reach £1.23b, which represents an improvement of +9% on 2016.

Exports to the Irish Republic have increased significantly over recent years. In 2016, it received 22% of all UK furniture exports, which equated to £0.25b.

Trade with leading European nations continued to be the main source of export income (63% of the total) and the main trade destinations were similar to those in 2015. Exports to the European Community totalled £0.71b in 2016 – an increase of £0.08b – with France, Germany, The Netherlands, Belgium, Italy and Spain being the primary recipients.

The negative trade gap continued to widen, with increases in imports outstripping any small increases in exports. It reached £4.7b in 2016, and could be almost £5.3b by the end of 2017. 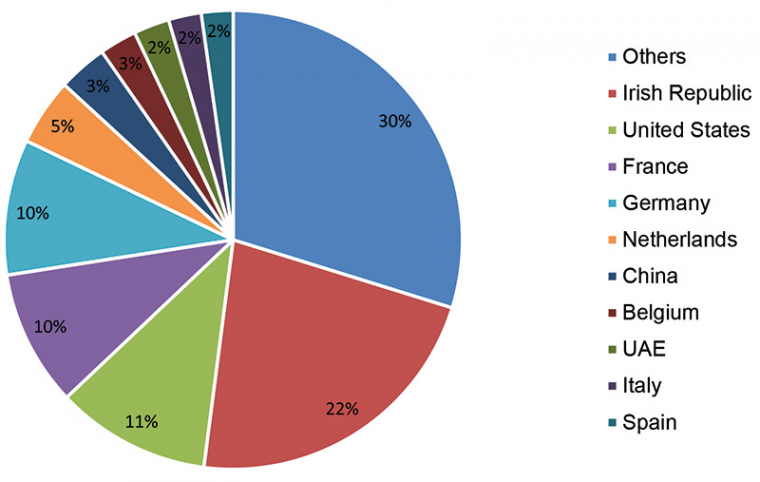 Furniture exports from the UK, 2016

Whilst exports to European countries are significant for the sector, the reality is that many of these countries continued to export more to the UK than vice versa. As such, the negative trade gap with the European Community in 2016 equated to £2.20b.

Dr Peter Beele is the technical development manager at furniture testing and research body FIRA. The full report is available free to FIRA members, and for £2000 otherwise. 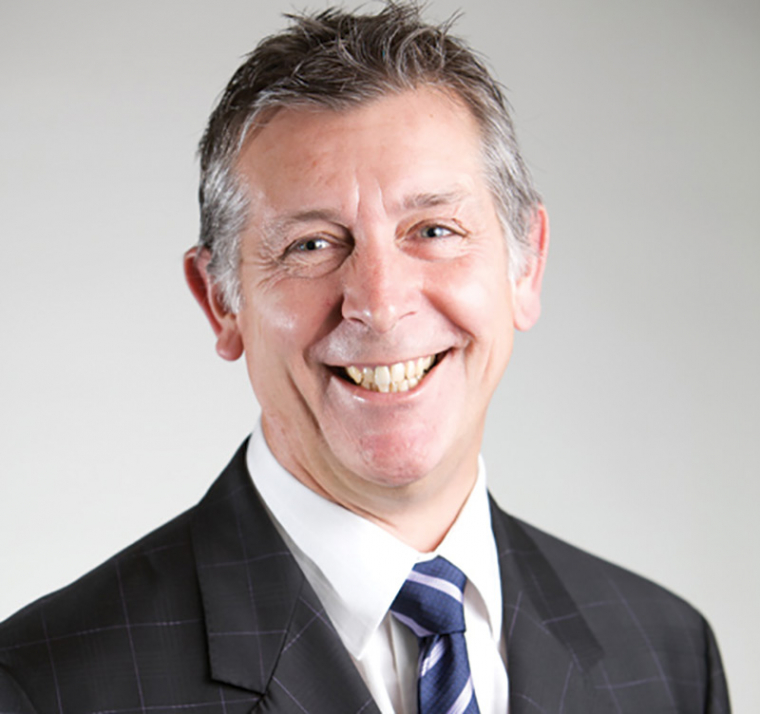