In 2021, Stemas, located in Pesaro Italy, celebrates its 40th anniversary as one of Italy’s leading specialist machinery manufacturers, primarily within the woodworking and panel processing industries.
Home / Resources / Articles / 2021 / October

Stemas was founded by two engineers STEfano Cecchini & MASsimon Umbri, ergo Stemas was duly named, its personal identity and manufacturing ethic remains as intact now as it was at its inception. 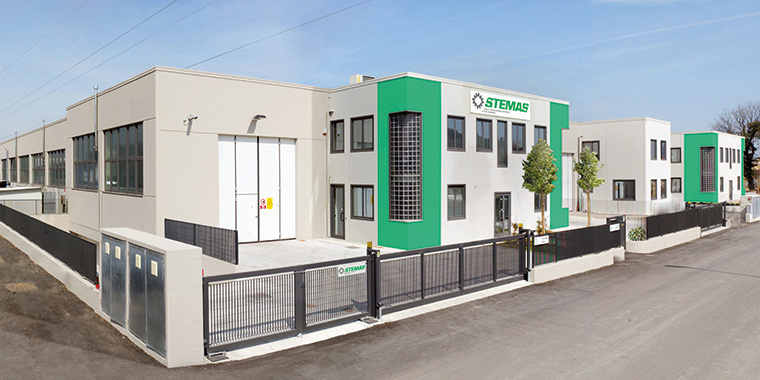 In the beginning company manufactured in a small way, sanding units, these basic units were then developed further into more sophisticated sanding systems dedicated high-quality finishing.

From these basic machines, more specialised and bespoke execution sanding and finishing equipment was developed. From these early ‘special machines’ lays the basic DNA of Stemas and firmly remains today with the now, well-established company motto – “special is our standard”. 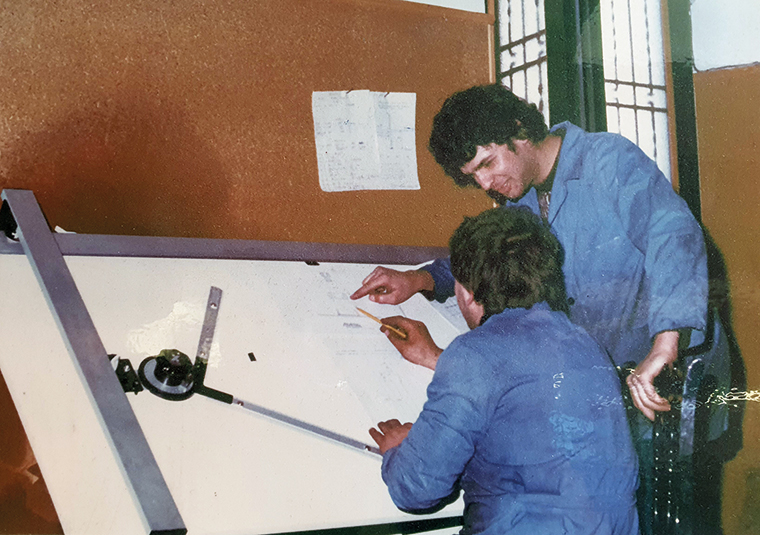 “It was as easy temptation just to simply follow the crowd as others did,” comments Angelo Glenn Onario, current CEO of Stemas, “in terms of producing standard nondescript and run of the mill woodworking machinery, but Stefano and Massimo were made of sterner stuff, they were old school, engineers…”

Angelo continues: “They relished a challenge and soon Stemas built up an enviable reputation as the go to guys for special execution machinery. They would go out to visit customers, make hand sketches of ideas, wherein the customer could not get cost-effective solutions from standard equipment on offer, no AutoCAD back in the day, all these machines were created in the mind and then drawn by hand!”

Stemas, growing year on year both in reputation and staff, is in a very considerable part down to the commitment of three of their senior staff: Angelo Glenn Onario (CEO), Marco Palazzi (service director) and Roberto Baldelli (automation director) – they were all invited to become shareholders at their 25th anniversary and as recognition of their personal contribution to the company’s growth. 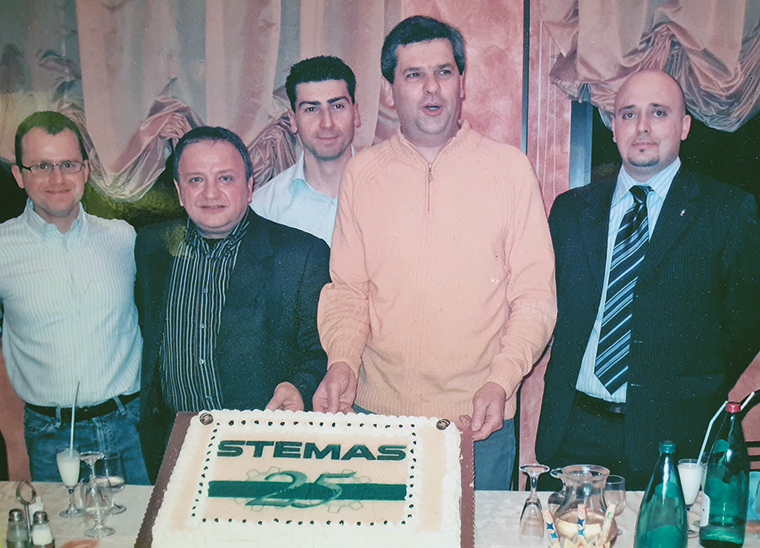 Over the years the bandwidth of product offering, and problem-solving competences grew exponentially and the skillsets of the workforce is reputed to be, and is widely recognised as, second to none within the wood machinery manufacturing industry in Italy – so much so that they are regularly invited to provide solutions even from their competitors!

Moreover, the size of their customers grew too, finding in Stemas not only a manufacturer for problem-solving solutions, but also a very reliable supplier, with its machines working for multiple shifts and in many cases 24/7, thanks to the high-quality of its design and the use of world class/first class components

With some of the biggest door manufacturers and panel processors in the world as regular year-on-year clients, Stemas has over the last 40 years built long-term relationships with its customers, all of whom want to gain that commercial advantage over their competitors, which Stemas maintains  simply cannot be done with standard machinery.

Even in the midst of the pandemic Stemas answered a call to arms from the Government and health authorities to help create a better and more reliant supply chain for face masks, Stemas and their partners produced one of the fastest, high quality face mask manufacturing systems in the world. Like the vaccines, this system was designed and devised in double quick time with several being sold to the USA and they still have ongoing orders.

“Specialist sanding machines still remain a part of the business, interior doors and door jambs, five-piece Shaker-style doors, windows, drawers, flooring machinery,” explains Lorenzo Esposito, technical sales and  marketing manager. “Although the woodworking industry is still a major focus for Stemas, we work with PVC and aluminium manufacturers as well as developing intelligent storage systems,” continues Lorenzo. “We have been nicknamed by a UK leading woodworking figure as the Tesla of the woodworking industry!”

Fastest gun in the west

Innovation is the prime mover for Stemas, and they have designed and developed what is now reputed to be the fastest, fully-automatic door routing and machining system in the world, capable, in its fullest execution as a turnkey operation, it is capable of producing three finished doors in a munite*.

The Perfect Door system is designed as a modular concept, wherein the line can be built-up in customised stages to suit the customer’s individual needs. FF=or example, a fully automatic first stage system can produce one complete door in just over 45 seconds* 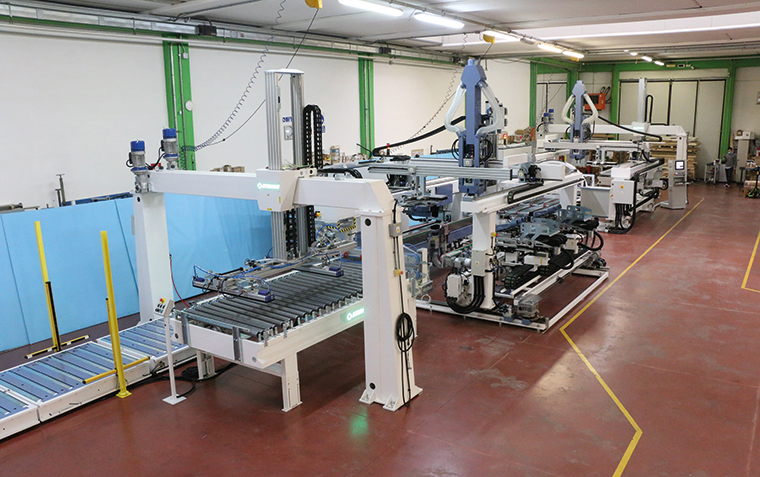 Perfect Door has certain features that traditional door routers simply do not have, nor can they be supplied. For example, in essence it does not require a full-time operator as it is a fully automatic/autonomous line, it will ‘check measure’ the door before machining starts, it will ‘talk’ in real time to the production planning dept and production managers.

In tandem with the Perfect Doors system, Stemas have been equally creative in the manufacturing of door jamb systems, from stand alone to fully automatic lines.

Stemas have many such lines in Europe, in particular in Poland – which incidentally appear to becoming a major and dominant European force in terms of door and jamb manufacture.

“Stemas have recently taken orders in the UK for a fully automatic Perfect Door System and jamb lines as well as five-piece door machinery,” says Angelo. “The UK purchasers of these Perfect Door systems will, without any doubt whatsoever, enjoy a huge commercial advantage over their competition and as a result will be able to enjoy a far more competitively priced product, much higher quality and yet still maintain a very healthy margin and/or increase.”

Comments Lorenzo: “The Perfect Door offering is now very well established and proven technology worldwide, that said, just about every door and jamb system manufactured is still pretty much a bespoke offering for the individual client, when one fully considers the purchasing price of five routers and the operational costs of the same Stemas becomes the more cost-effective system by a country mile.” 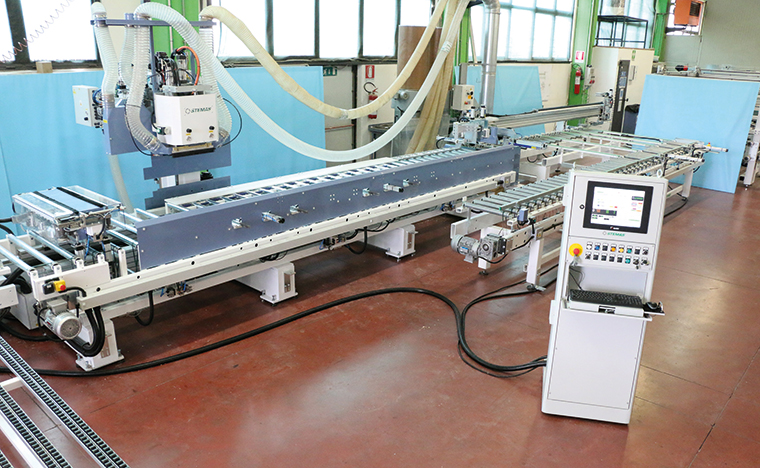 Besides the interior door production, Stemas have also gained a very strong market position in the five-piece door (Shaker-style) manufacturing industry, from standalone/prototyping machines to some of the fastest lines in the market today.

“However, customers can also choose the flexibility of the Flexy-Suite,” says Lorenzo, “which is composed of a series of stand-alone machines to manage the production of stiles and rails from the cutting of bars up to the assembling clamp, for a production of upto 400 doors per shift with only three to five men!”

This Flexy Suite allows the small- to medium-sized kitchen manufacturer to enter into the production of five-piece doors, with the benefit of creating his own unique/bespoke doors, no longer having to have very large and expensive inventory gathering dust, no longer have to ‘pay through the nose’ for a special sized door, no longer have to order a minimum quantity when only one door is needed, no longer needing to ‘forward order’ stock and the risk this involves, and no longer having obsolete stock.

“In most cases,” comments Angelo, “these machines allow entry into market and generally have a payback in around 12-18 months or so.”

“All of these current developments and ranges represent a significant proportion of our business, yet this is not enough for the Stemas DNA,” continues Angelo, “we are all constantly looking for new challenges, that is the reason why this year a new website www.edgesealing.com has been launched”. 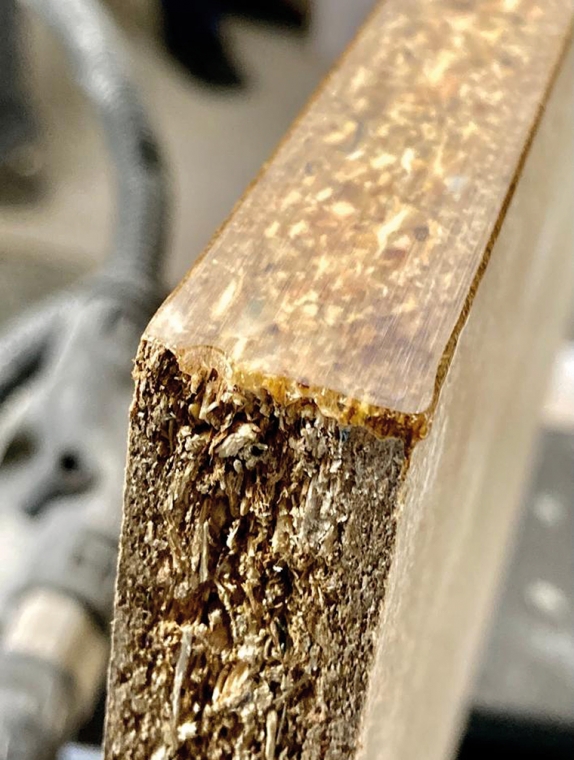 The goal is to bring a consolidated technology of the edge sealing with UV to a bigger scale around the world. In the last decade Stemas has helped many customers around the world to switch from MDF to particle board thanks to the edge quality ensured by such process in the Pro-Filling machines.

“The savings in material costs alone are off the Richter scale,” claims Angelo, “in many cases less than a one year pay back, let alone the savings in production costs and labour – for many machinery manufacturers this is special for Team Stemas its standard.”